Information about The Honorable George Forbes 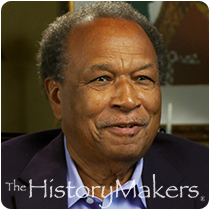 Lawyer and city council member George L Forbes was born on April 4, 1931 in Memphis, Tennessee to Cleveland and Eleanor Forbes. He served a two-year tour of duty in the U.S. Marine Corps after graduating from high school and then moved to the Cleveland area in the 1950s. Forbes received his B.A. degree from Baldwin-Wallace College in Berea, Ohio in 1957 and his J.D. degree from the Cleveland Marshall College of Law in 1961. He was admitted to both the Ohio State Bar Association and the Federal Bar Association in 1962.

In 1963, he secured a seat on the Cleveland City Council where he served in various capiticies for the next twenty-seven years. He assisted Carl B. Stokes in his 1967 mayoral campaign, making Stokes the first black mayor of a major U.S. city, and helped to establish the 21st District Congressional Caucus which improve race relations within the Ohio Democratic Party. In 1971, Forbes became a founding partner of Rogers, Hornton & Forbes (now Forbes, Fields & Associates Co., L.P.A.) – the first African American law firm established in Cleveland, Ohio and the largest minority-owned law firm in the State of Ohio. In 1973, Forbes became the first African American to be elected as president of the Cleveland City Council where he served until 1989, and was instrumental in the merging of the city-owned Cleveland Transit System with the new Greater Cleveland Regional Transit Authority in 1974. In 1992, Forbes was elected as president of the Cleveland Chapter of the National Association for the Advancement of Colored People (NAACP).

Forbes served in a number of civic organizations, including the Cleveland Chapter of The National Urban League, the Council of Economic Opportunity, the Businessmen’s Interracial Committee on Community Affairs, the John Harlan Law Club, and the National Association of Defense Lawyers for Criminal Cases. In 1990, Cleveland State University honored Forbes with the Distinguished Alumni Award. In addition, Forbes received Honorary Doctorate degrees from Central State University in 1989 and Baldwin-Wallace College in 1990. Forbes received the top honor bestowed by the NAACP, the Freedom Award, in 2009.

George L. Forbes was interviewed by The HistoryMakers on May 9, 2013.

See how The Honorable George Forbes is related to other HistoryMakers
Donate Now
Click Here To Explore The Archive Today!