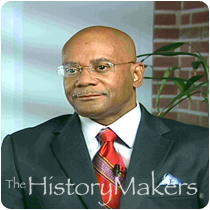 See how The Honorable Freeman Bosley, Jr. is related to other HistoryMakers
Donate Now

Mayor and lawyer Hon. Freeman Robertson Bosley, Jr., the first African American mayor of St. Louis, Missouri, was born on July 20, 1954 in St. Louis to Marjorie Ellen and Freeman Bosley, Sr. Public service was instilled in Bosley by his father, a prominent citizen of “the Ville” in North St. Louis. Bosley, Sr. was elected city alderman in 1977 and unsuccessfully ran for mayor in 1985. Bosley attended Farragut Elementary School and was a student activist at the predominantly white Central High School, graduating in 1972. He enrolled at Saint Louis University, where he received B.A. degrees in urban affairs and in political science in 1976. During college, Bosley was mentored by Ernest Calloway, a civil rights activist and professor at Saint Louis University. Bosley went on to attend the Saint Louis University School of Law, earning his J.D. degree in 1979. While at Saint Louis University, Bosley was elected president of the Black Student Alliance and the Black-American Law Students Association.

After law school, Bosley worked as a staff attorney for the Legal Services of Eastern Missouri, specializing in consumer affairs and utility companies. He was later employed by the law offices of Bussey & Jordan. Inspired in law school by U.S. District Court Judge Clyde Cahill, Bosley helped in the political campaigns of Charles Quincy Troupe and Charles Bussey. In 1982, Bosley became the first African American Circuit Clerk of Courts for the 22nd Judicial Circuit, a position he held for ten years. During this time, he also served as the 3rd Ward Democratic Committeeman before being elected the St. Louis Democratic Party Chair in 1990. Bosley's political leadership set the stage for his successful mayoral run, winning the April 6, 1993 election with 66.5% of the vote.

Early in his term, Bosley oversaw the safe evacuation of 10,000 residents during the Great Flood of 1993. He later helped to orchestrate the $70 million bailout of Trans World Airlines (TWA), resulting in the airline relocating its world headquarters to the city. He facilitated the move of the Los Angeles Rams football team to St. Louis in 1995, leading to a 2000 Super Bowl win. Bosley's administration passed two property tax increases, successes that generated an additional $40 million of revenue for the city. Bosley ran for re-election in 1997 but lost to the African American police chief, Clarence Harmon, in the Democratic Primary. Bosley also ran unsuccessfully for mayor in the Democratic Primary in 2001. After leaving office, Bosley practiced law with the law firm Caldwell & Singleton and joined two other former mayors, James Conway and Vincent Schoemehl, as leaders in the group Citizens for Home Rule. Bosley started his own law practice, Bosley & Associates, in 2004 and continues to serve as mentor to young legal and political hopefuls.

Bosley is divorced with a daughter, Sydney. He continues to live in the same North St. Louis neighborhood where he grew up.

Hon. Freeman Robertson Bosley, Jr. was interviewed by The HistoryMakers on October 15, 2007.

See how The Honorable Freeman Bosley, Jr. is related to other HistoryMakers
Donate Now
Click Here To Explore The Archive Today!