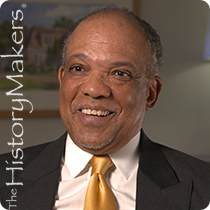 "I'm making lemonade out of lemons."

Political leader and physician Dr. Ewart Brown was born May 17, 1946 in Flatts Village, Bermuda to Ewart D.A. Brown and Helene Darrell Brown. He attended the Central School and the Bermuda Technical Institute before attending the Berkeley Institute in 1957. Brown’s parents sent him to Spanish Town, Jamaica for high school, where he attended St. Jago High School. While living in Jamaica, he took an interest in politics, and was exposed to teachings by Norman Manley and Alexander Bustamante, leaders of the Jamaican independence movement. Brown enrolled at Howard University in Washington, D.C. in 1964, where he studied chemistry. At Howard, he worked as a sportswriter for the Washington Post, was elected president of the student council, and was active in football and track and field. In 1966, he represented Bermuda as a sprinter in the British Empire and Commonwealth Games in Kingston, Jamaica. Brown was a leader in the 1968 student occupation of Howard’s administration building, and helped to negotiate an agreement with university trustees. He graduated in 1968 with his B.Sc. degree.

Brown continued his studies at the Howard University School of Medicine, where he graduated with his M.D. degree in 1972. He hoped to practice medicine in Bermuda, but after being denied a license there on account of his political views, he moved to California and earned his M.S. degree in public health from the University of California at Los Angeles and opened the Vermont Century Medical Clinic in South Central Los Angeles. After finally earning his license in Bermuda in 1988, he founded Bermuda Healthcare Services, campaigned for office and then won election to the Parliament of Bermuda representing the Progressive Labour Party (PLP) in 1993. Brown was promoted to Minister of Transport in 1998 when the PLP became Bermuda’s ruling party, and then became deputy premier in 2003. He defeated Alex Scott in a PLP leadership contest in 2006, and so took office as Premier in October of that year.

In office as premier, Brown’s accomplishments included implementing restrictions on vehicle ownership, advocating for Bermuda’s independence from the United Kingdom, and agreeing to resettle on Bermuda four Uighur Muslims who had been freed after their imprisonment by the United States at Guantanamo Bay. He also continued his medical practice, and founded Brown-Darrell Clinic in 2008 with his wife, Wanda Henton Brown. Brown stepped down as premier in 2010.

Ewart Brown was interviewed by The HistoryMakers on August 20, 2017.