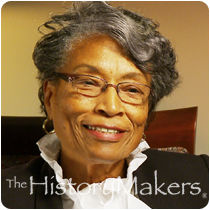 Favorite Color:
Purple
Favorite Food:
Corn, Cabbage, Okra, Tomato, Fried Chicken, Fish
Favorite Time of Year:
Fall
Favorite Vacation Spot:
Mountains, Beaches
Favorite Quote:
That Too Shall Come To Pass. Do Unto Others As You Would Have Them Do Unto You

Favorite Color:
Purple
Favorite Food:
Corn, Cabbage, Okra, Tomato, Fried Chicken, Fish
Favorite Time of Year:
Fall
Favorite Vacation Spot:
Mountains, Beaches
Favorite Quote:
That Too Shall Come To Pass. Do Unto Others As You Would Have Them Do Unto You

See how The Honorable Eva M. Clayton is related to other HistoryMakers

U.S. congresswoman Eva M. Clayton was born in Savannah, Georgia on September 16, 1934. In 1955, Clayton received her B.S. degree in biology from Johnson C. Smith University. She then obtained her M.S. degree in biology and general science from North Carolina Central University in Durham, North Carolina in 1962. With the encouragement of civil rights activist and attorney Vernon Jordan, Clayton sought election to Congress in a north-central North Carolina district. Despite a losing bid, Clayton’s initial run generated black voter registration. In the early 1970s, she worked for several public and private ventures, including the North Carolina Health Manpower Development Program at the University of North Carolina. In 1974, she cofounded and served as the executive director of Soul City Foundation, a housing organization that renovated dilapidated buildings for use as homeless shelters and daycare centers. Clayton worked on the successful gubernatorial campaign of Jim Hunt, who later appointed Clayton the assistant secretary of the North Carolina department of natural resources and community development. Clayton served in that capacity from 1977 until 1981. In 1982 she won election to the Warren County Board of Commissioners, which she chaired until 1990.

When Representative Walter Jones, Sr. announced his retirement in 1992, Clayton entered the Democratic primary to fill his seat. She eventually won the special election to fill the last two months of Jones’s unexpired term in the 102nd Congress (1991–1993) and defeated Republican Ted Tyler for a full term in the 103rd Congress (1993–1995). Clayton became the first black woman elected to U.S. Congress in North Carolina. In her subsequent four bids for re-election, she won comfortably, with 60 percent or more of the vote. Clayton served with distinction for ten years as the U.S. Representative of North Carolina’s 1st Congressional District. While in Congress, she served on Agriculture and Budget Committees and as ranking member of the Agriculture Department’s Operations Oversight, Nutrition and Forestry Subcommittees. Clayton is the past chair of the Congressional Black Caucus Foundation. In 2003, her name was put forth as a possible Democratic vice-presidential candidate. Clayton completed a three year-assignment with the Food Agriculture Organization of the United Nations (FAO) in Rome, Italy in 2006 as Assistant Director-General and Special Adviser to the Director-General. In this post, Clayton helped to establish national alliances and partnerships in over 24 countries to fight hunger and poverty including the United States of America. She currently serves as the chairperson of Preserve Community Pharmacy Access NOW (PCPAN), a project of the Pharmacy Choice and Access Now (PCAN) coalition, which fights on behalf of patients to preserve access to quality and affordable health care and pharmacy services.

Clayton is the mother of four adult children, Joanne, Theaoseus, Jr., Martin and Reuben. She is married to Attorney Theaoseus T. Clayton, Sr. and they are proud grandparents of six grandchildren.

Eva M. Clayton was interviewed by The HistoryMakers on February 22, 2012.

See how The Honorable Eva M. Clayton is related to other HistoryMakers
Click Here To Explore The Archive Today!