Information about The Honorable Eugene Sawyer 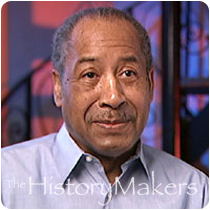 Favorite Color:
Blue
Favorite Food:
Macaroni, Cheese
Favorite Time of Year:
Summer
Favorite Vacation Spot:
Mexico
Favorite Quote:
Do Unto Others As You Would Have Them Do Unto You.

Favorite Color:
Blue
Favorite Food:
Macaroni, Cheese
Favorite Time of Year:
Summer
Favorite Vacation Spot:
Mexico
Favorite Quote:
Do Unto Others As You Would Have Them Do Unto You.

See how The Honorable Eugene Sawyer is related to other HistoryMakers

Civil servant and former Chicago Mayor Eugene Sawyer was born in Greensboro, Alabama, on September 3, 1934, to Bernice and Eugene Sawyer, Sr. The oldest of six children, Sawyer graduated from Alabama State University in Montgomery in 1956 with his B.S. degree in secondary education. While still in school, Sawyer traveled to Chicago every summer to live with his aunt on the South Side and work odd jobs.

After graduating from college, Sawyer taught high school math and chemistry for one year in Prentiss, Mississippi; in 1957, he moved to Chicago permanently to pursue a career in laboratory science. Sawyer spent two years working for Rockford Sprinklers before he was hired at a South Side water filtration plant in 1959 to work as a lab technician. At the same time, Sawyer joined the Democratic Ward Organization of the 6th Ward, where he worked his way up through both the organization and the city water department. Over time, Sawyer served as president of the 6th Ward Young Democrats; financial secretary for the entire ward organization; and president.

Sawyer served as alderman of the 6th Ward from 1971 until 1988; in 1987, following the unexpected death of Chicago Mayor Harold Washington, he was elected by the City Council to serve as acting mayor of the City of Chicago. Sawyer was sworn in at 4:01 a.m. on December 2, 1987, after a contentious fight that divided Chicago’s African American community. During his tenure as mayor, Sawyer expanded Chicago’s governmental outreach to develop cooperative partnerships with business and industry.

Following his term as mayor, Sawyer and his friend, businessman Charles Harrison, III, partnered to form CEI International, a reseller of natural gas and other fuels; he served as vice president of the company until 1997.

Sawyer was an active member of Alpha Phi Alpha Fraternity since 1953 and a trustee at Vernon Park Church and vice chairman of the board of the Wyatt Center.

Eugene Sawyer passed away on January 19, 2008, at the age of seventy-three.

See how The Honorable Eugene Sawyer is related to other HistoryMakers
Click Here To Explore The Archive Today!