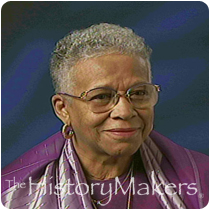 "I can do all things through Christ that strengthens me."

Ethel Skyles Alexander was born on January 16, 1925 in Chicago, Illinois. Her father, Charles Skyles, a minister, went on in 1945 to become a member of the Illinois General Assembly. Alexander moved with her family to Davenport, Iowa, and to Winnipeg, Manitoba, Canada, due to her father’s parish assignments. Returning to Chicago, Alexander attended Sherwood Elementary School and Englewood High School. After completing high school, she had one child, Gayla Aniece.

Alexander worked as a clerk in the Cook County Circuit Court’s Records Department for thirty-three years. She was the first woman to be appointed Assistant Chief Deputy Clerk of the Criminal Division of the Circuit Court. Alexander returned to school, receiving her B.A. from Loop College (now Harold Washington), as well as enrolling in an IBM Executive Training Course.

In 1978, Alexander was elected to the Illinois House of Representatives. She was known for waving a red handkerchief in the air whenever she wanted to discuss an issue with fellow legislators. In 1986, Alexander was appointed to replace the late Charles Chew in the State Senate, where she remained until she retired in 1993. While in the legislature, Alexander served as vice-chair of the Elections and Reapportionment Committee. She co-sponsored a bill that prohibited state agencies from trading with apartheid-era South Africa and sponsored legislation that toughened child pornography laws.