Information about The Honorable Ertharin Cousin 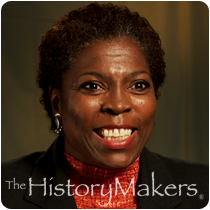 See how The Honorable Ertharin Cousin is related to other HistoryMakers

Foreign ambassador, food service executive, and public affairs director Ertharin Cousin was born in 1957, in Chicago, Illinois. She received her B.A. degree from the University of Illinois at Chicago in 1979, and went on to receive her J.D. degree from the University of Georgia School of Law in 1982. In 1993, Cousin moved to Washington D.C. and began working as the deputy chief of staff for the Democratic National Committee. In 1994, she began serving as the U.S. State Department’s liaison to the White House, in which capacity she received a Meritorious Service Award.

In 1996, Cousin stopped her work for the State Department in order to run the Illinois portion of President Bill Clinton and Vice President Albert Gore’s reelection campaign and in 1997, Cousin was appointed to the board for International Food and Agricultural Development and began serving as vice president for government and community Affairs for Jewel Food Stores. Two years later, when Albertsons Foods bought Jewel, Cousin began serving as group vice president of public affairs for Albertsons and was later promoted to senior vice president of public affairs. In 2002, Cousin joined the board of directors for food bank and food relief distribution nonprofit Feeding America and in 2004, she became its executive vice president and chief operating officer. In this capacity, she led food relief efforts during Hurricane Katrina which helped to deliver over 62 million pounds of food to the devastated Gulf Coast of the U.S.

In 2006, Cousin left Feeding America to found and serve as president of the Polk Street Group, a public affairs consulting firm based in Chicago, Illinois. After serving in that capacity for three years, Cousin left the company in the hands of her son, Maurice Cousin, in order to accept President Barack Obama’s appointment as U.S. Representative to the United Nations Agencies for Food and Agriculture in Rome, Italy. During her time with the U.N. agencies, she has worked to help set up several new country-led aid programs and has also worked to bring food relief to Port-au-Prince, the capital of Haiti, after the massive earthquake there in 2010.

See how The Honorable Ertharin Cousin is related to other HistoryMakers
Click Here To Explore The Archive Today!