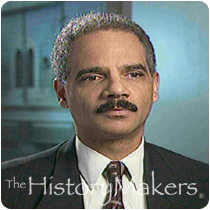 Eric Himpton Holder was born on January 21, 1951, in the Bronx, New York. His mother was a telephone operator and secretary and his father was in the real estate industry. In 1969, Holder earned his high school diploma and a Regents Scholarship from Stuyvesant High School.

Holder received his B.A. degree in American history in 1973 from Columbia University where he became active in civil rights. He graduated from Columbia Law School in 1976. While a law student, he clerked for the NAACP Legal Defense Fund and the Department of Justice’s Criminal Division in 1974 and 1975, respectively. The Department of Justice clerkship led to his first job after law school, when he worked as part of the attorney general’s honors program in 1976. In this position, Holder prosecuted public officials accused of corruption, including the treasurer of the state of Florida, the ambassador to the Dominican Republic, a local judge in Pennsylvania and an assistant U.S. Attorney in New York.

In 1988, Holder was nominated by former President Ronald Reagan to become an associate judge of the Superior Court of the District of Columbia. During his five years on the bench, he presided over hundreds of civil and criminal trials. In 1993, Holder was nominated by President Bill Clinton to serve as the U.S. attorney for Washington, D.C., becoming the first African American to serve in that position. During his four-year tenure, he created a domestic violence unit, implemented a community prosecution project, and developed Operation Cease-Fire, a program aimed at getting guns out of the hands of criminals.

In 1997, President Clinton appointed Holder as the first African American deputy attorney general, the number two position in the Justice Department. As deputy attorney general, Holder supervised all of the DOJ’s litigating, enforcement, and administrative components in both civil and criminal matters. He also created Lawyers for One America, a program designed to diversify the legal profession and increase pro bono work nationally.

In 2001, Holder joined the firm of Covington and Burling as a litigation partner handling civil and criminal cases, domestic and international advisory matters and internal corporate investigations. In February of 2009, Holder was confirmed as the first African American U.S. Attorney General under the Obama Administration.