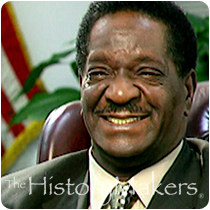 Favorite Color:
Blue
Favorite Food:
Spaghetti
Favorite Time of Year:
Spring
Favorite Quote:
To be or not to be. -Shakespeare

Favorite Color:
Blue
Favorite Food:
Spaghetti
Favorite Time of Year:
Spring
Favorite Quote:
To be or not to be. -Shakespeare

See how The Honorable Emil Jones, Jr. is related to other HistoryMakers
Donate Now

Born in 1935, Emil Jones was raised in one of Chicago's integrated communities, where he was exposed to many different traditions and cultures. After graduating from Roosevelt University, Jones held several jobs before becoming inspired by the 1960 presidential candidacy of John F. Kennedy. Jones volunteered for the campaign and organized support for Kennedy. During this effort, Jones decided to pursue a political career of his own, making important political contacts during the campaign. After Kennedy's presidential campaign ended, Jones served as an assistant for Wilson Frost, who was the only African American alderman to head the City of Chicago's Finance Committee. Then, in 1972, Jones was elected to the Illinois House of Representatives, a position he held for ten years before moving to the Senate. In 2003, Jones was unanimously selected as Senate Minority Leader, one of the chief spokespersons for the Senate Democrats.

A lifelong resident of Chicago's South Side, Jones has remained close to his community. He has been a passionate and consistent advocate for public schools. His commitment to education resulted in the passage of a bill that channeled hundreds of millions of dollars for education of children from disadvantaged families. Furthermore, he successfully passed legislation that now requires the teaching of African American and Holocaust history in all Illinois schools.

Very active in the promotion of minority-owned businesses, Jones supported legislation that guarantees a portion of state construction contracts to qualified minority entrepreneurs. This was the first such legislation of its kind in Illinois. Jones also ensured the passage of a bill that encouraged public pension systems to use minority and female investment managers for their pension investments. Both of these measures are designed to promote growth for all communities.

One of Jones' later accomplishment is the creation of an educational pamphlet designed to inform Illinois citizens about the important history of African American legislators who served in the Illinois General Assembly in the 19th, 20th, and 21st centuries. This led to the production and distribution of an educational project entitled Pioneers in the Struggle which includes a video documentary, an interactive CD-ROM and a curriculum guide that document the history of African American legislators from 1877 to 2001. Jones has made it possible for this innovative educational package to be distributed free of charge to classrooms throughout the state.

See how The Honorable Emil Jones, Jr. is related to other HistoryMakers
Donate Now
Click Here To Explore The Archive Today! 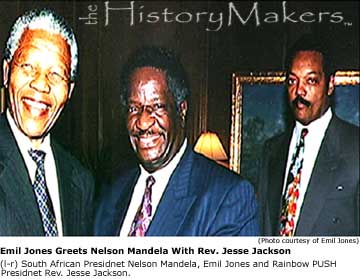 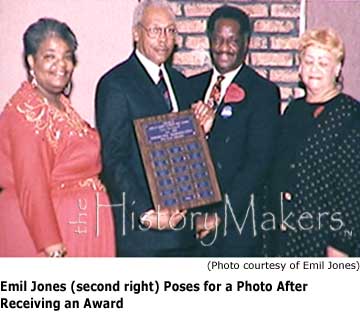