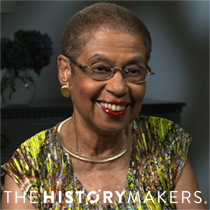 Lawyer and political leader Eleanor Holmes Norton was born on June 13, 1937 in Washington D.C. to Vela and Coleman Holmes. She received her B.A. degree from Antioch College, and simultaneously earned her M.A. degree in American Studies and her J.D. degree from Yale University in New Haven, Connecticut.

After graduating from Yale, Norton worked as a law clerk for Federal District Court Judge A. Leon Higginbotham, Jr. She was appointed assistant legal director of the American Civil Liberties Union in 1965, where she represented sixty female employees of Newsweek in their gender discrimination lawsuit against the newspaper in 1970. That same year, she left the American Civil Liberties to head New York’s Human Rights Commission. An active civil rights and feminist leader, Norton served on the founding board of Women’s Rights Law Reporter, the first legal periodical focused on women, and was one of the women to sign the Black Woman’s Manifesto, arguing against the oppression of black women.

In 1977, Norton was appointed the first female chair of the Federal Equal Employment Opportunity Commission by President Jimmy Carter. She began teaching law classes at the Georgetown University Law Center in 1981, continuing to teach as a tenured professor of law even after being elected to office. Norton was first elected to the U.S. Congress in 1990 as a democratic delegate to the House of Representatives. Though Norton did not have voting power in Congress as a delegate, she did use her position to influence decisions in the House and in the Senate. Over the years, Norton has brought significant economic development to the District of Columbia throughout her service in Congress, while creating and preserving jobs in Washington, D.C. and securing the construction of the U.S. Department of Homeland Security headquarters in Washington, D.C., in addition to the development of the Southeast Federal Center.

Norton has been named one of the 100 most important American women, and one of the most powerful women in Washington, D.C. She has received more than fifty honorary degrees.

Eleanor Holmes Norton was interviewed by The HistoryMakers on June 16, 2017.