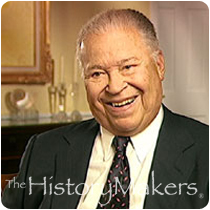 Edward Brooke, III was born in Washington, D.C., on October 26, 1919. His father, Edward Brooke, Jr., was an attorney for the Veterans Administration for more than fifty years, and his mother, Helen, later worked on all of Brooke’s political campaigns. Brooke entered Howard University at the age of sixteen, and earned his B.A. degree in sociology in 1941. After graduation, Brooke entered the U.S. Army and was sent overseas. A decorated captain in the all-black 366th Combat Infantry Regiment, Brooke defended men in military tribunals. During the Italian campaign, Brooke disguised himself as an Italian, crossing enemy lines to meet with the Italian Partisans and facing Nazi and Fascist troops.

Returning from World War II and experienced in legal proceedings, Brooke enrolled in Boston University Law School, earning an LL.B. in 1948 and an LL.M. a year later, as well as serving as the editor of the school’s Law Review. While practicing law in Boston, Brooke began seeking political office. Despite good showings in several races between 1950 and 1960, he failed to win. However, in 1960, he was appointed chairman of the Boston Finance Commission, where he exposed corruption in many city departments. His popularity high from his work there, Brooke was elected to the office of Massachusetts Attorney General, becoming the first African American to hold that post in the nation. He remained in the office for two terms, and in 1966, he won election to the U.S. Senate, where he was the first African American to be elected by popular vote, the first to be seated since Reconstruction and later the only to be re-elected.

During his first term in the Senate, Brooke spent a great deal of time on the issue of the Vietnam War, traveling to Asia on fact-finding missions. Upon his return, he requested that the United States cease using napalm. He also began calling for an end to trade with South Africa because of its apartheid policies. In 1967, President Lyndon B. Johnson appointed him to the National Commission on Civil Disorders, which made recommendations that ultimately took shape as the 1968 Civil Rights Act. Brooke later challenged Richard Nixon's Supreme Court nominees Hainsworth and Carswell, even though he had supported Nixon’s bid for the presidency. Brooke later became the first senator to call for Nixon’s resignation. Leaving Congress in 1979, Brooke spent another six years in private practice before retiring.

Brooke received thirty-four honorary degrees from the nation’s most prestigious colleges and universities and numerous other awards, including the Spingarn Medal from the NAACP and the Grand Cross of the Order of Merit from the Italian Government. In 2000, the Commonwealth of Massachusetts dedicated a courthouse in his honor.