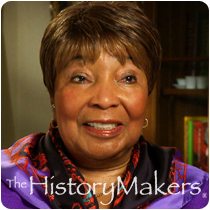 U.S. Congresswoman Eddie Bernice Johnson was born on December 3, 1935 to Lee Edward Johnson and Lillie Mae White Johnson in Waco, Texas. She and her three siblings grew up attending Toliver Chapel Baptist Church, where her mother was an active church member. After attending A.J. Moore High School, Johnson graduated at the age of sixteen and moved to Indiana to attend Saint Mary’s College of Notre Dame, where she graduated in 1955 with her nursing certificate.

Johnson then began work as a psychiatric nurse at La Rue Carter Psychiatric Hospital in Indianapolis, Indiana until she passed the boards. Then Congresswoman Johnson returned to Texas and started working at the Dallas Veterans Administration Hospital in 1956. While still employed at the hospital, Johnson earned her B.S. degree in nursing in 1967 from the Harris School for Nursing at Texas Christian University in Fort Worth, Texas. That same year, she was promoted to chief psychiatric nurse. She left the hospital in 1972 to run for public office in the Texas House of Representatives. There, she made a name for herself fighting for minority and women’s’ issues. In 1976, Johnson earned her M.P.A. degree from Southern Methodist University in Dallas, and in 1977, President Jimmy Carter appointed her as the principal official of Region VI for the Department of Health, Education and Welfare (H.E.W.). She remained with the H.E.W. until 1981, when she left public office to found her own business, a real estate company. In 1986, Johnson was elected to public office once again, but this time to the Texas Senate, where she worked tirelessly to improve health care and to end racial discrimination. In 1992, Johnson ran for the U.S. House of Representatives and was elected.

As a U.S. Congresswoman, Johnson has led the battle on legislation to improve health care, the environment, civil rights, women’s issues, science research and education. She is a member of the Committee of Science and Technology and the Committee of Transportation and Infrastructure. In 2001, Johnson served as Chairwoman of the Congressional Black Caucus. In 1993 and 1994, she was named by Ebony magazine as one of the 100 Most Influential African Americans and in 2001, the magazine named her one of the 10 Most Powerful African American Women.

Johnson has one son, Dawrence Kirk Johnson, and three grandsons.

Eddie Bernice Johnson was interviewed by The HistoryMakers on March 7, 2012

See how The Honorable Eddie Bernice Johnson is related to other HistoryMakers
Click Here To Explore The Archive Today!