Information about The Honorable Earl Strayhorn 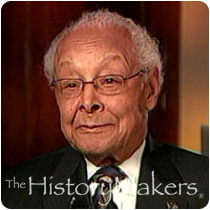 Favorite Time of Year:
All Seasons
Favorite Quote:
How lucky I am to have existed and been allowed to be around for as long as I have.

Favorite Time of Year:
All Seasons
Favorite Quote:
How lucky I am to have existed and been allowed to be around for as long as I have.

See how The Honorable Earl Strayhorn is related to other HistoryMakers

Judge Earl Edward Strayhorn was born on April 24, 1918, in Columbus, Mississippi to Minnie Lee Orvis Strayhorn and Earl Edward Strayhorn, Sr. He graduated from Tilden Tech High School in Chicago in 1936. Strayhorn received an A.B. degree from the University of Illinois in 1941 and his J.D. degree from DePaul University Law School in 1948. He also served his country as an artillery officer as one of the Tuskegee Airmen.

From 1949 until 1952, Strayhorn worked as a prosecuting assistant state’s attorney for Cook County, Illinois. From 1952 until 1970, he had his own practice while serving as Chicago civil service commissioner between 1959 and 1963. In 1970, he became a Cook County Circuit Court judge, serving for twenty-eight years in the administrative offices of the Illinois courts. Known for his independent thinking and his unique sense of justice, Strayhorn was well respected for his no-nonsense style in the courtroom. From 1995 until he retired in 1998, he headed the county court system’s largest section, the First Municipal Division.

Strayhorn taught law classes at numerous colleges and universities, including: Northwestern University School of Law, Harvard Law School, Emory University College of Law, the National College of Criminal Defense Attorneys, Cardozo School of Law and the National Institute of Trial Advocacy. Strayhorn served as vice president of the Chicago Urban League from 1948 until 1960 and has been on the boards of many organizations. He was a member of the NAACP and was parliamentarian for Tuskegee Airmen, Inc. from 1985 to 1994.

Strayhorn was married to Lygia Eugenia and had two children, Donald and Earlene. He passed away on February 15, 2009 at the age of 90.

Strayhorn was interviewed by The HistoryMakers on January 14, 2003.

See how The Honorable Earl Strayhorn is related to other HistoryMakers
Click Here To Explore The Archive Today!