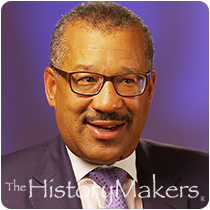 See how The Honorable Dwight Bush, Sr. is related to other HistoryMakers
Donate Now

Bank executive and United States ambassador Dwight L. Bush, Sr. was born on February 4, 1957 in St. Louis, Missouri to Charlie and Jessie Bush. He was raised in East St. Louis, Illinois, and attended Clark Junior High School and East St. Louis High School. He graduated from Cornell University in 1979 with his B.A. degree in government and economics.

Upon graduation, Bush joined Chase Manhattan Bank as a trainee in the management development program, and went on to become the bank’s first African American managing director. His tenure at Chase included international corporate banking assignments in Latin America, Asia and the Middle East, and corporate finance and project finance in New York and Washington, D.C. In 1994, he was named vice president of corporate development and chief credit officer of Sallie Mae, where he served until 1997. From 1998 to 2006, Bush worked as a principal at Stuart Mill Capital, LLC; vice president and chief financial officer at SatoTravel Holdings, Inc.; and vice chairman at Enhanced Capital Partners, LLC.

In 2002, Bush founded D.L. Bush & Associates, a financial advisory and private investment firm located in Washington, D.C., where he serves as managing partner and president. Bush then helped establish Urban Trust Bank in 2004, and went on to serve as president and CEO of Urban Trust Bank, Urban Trust Holdings and president of UTB Education Finance, LLC from 2006 until 2008. On August 1, 2013, Bush was nominated by President Barack Obama to serve as the United States Ambassador to the Kingdom of Morocco; and, in March of 2014, the U.S. Senate confirmed the appointment.

Bush was appointed a director of EntreMed Inc. in 2004, and was named vice chairman in 2010. He has also served on the boards of the GAVI Alliance, Cornell University, The Vaccine Fund, ICBC Broadcast Holdings Inc., The Georgetown Day School, and The National Symphony Orchestra. He served on the boards of directors of Urban Trust Bank Holdings, UTB Education Finance, LLC, U.S. Education Finance, LLC, and Urban Cableworks. In addition, Bush was a director of JER Investors Trust Inc., and a member of The White House Fellows Selection Committee.

Dwight Bush was interviewed by The HistoryMakers on March 22, 2014.

See how The Honorable Dwight Bush, Sr. is related to other HistoryMakers
Donate Now
Click Here To Explore The Archive Today!