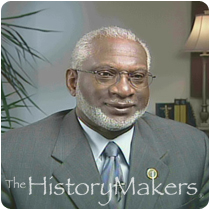 See how The Honorable Dr. David Satcher is related to other HistoryMakers

Federal government employee, city government employee, and medical school president Dr. David Satcher was born to Wilmer and Anna Satcher on March 2, 1941, in Anniston, Alabama. He graduated from Morehouse College in 1963 and earned his M.D. and Ph.D. degrees in cytogenetics from Case Western Reserve University in 1970. He completed his residency and fellowship training at Strong Memorial Hospital, the University of Rochester, UCLA, and King-Drew Medical Center.

Satcher served as director of the King-Drew Sickle Cell Research Center at the University of California, Los Angeles from 1973 to 1979. He developed and chaired the King-Drew Department of Family Medicine, and served as interim dean of the Charles R. Drew Postgraduate Medical School from 1977 to 1979. Satcher also served as professor and chairman of the Department of Community Medicine and Family Practice at Morehouse School of Medicine from 1979 to 1982, and then as president of Meharry Medical College from 1982 to 1993. President Bill Clinton appointed Satcher to the positions of Director of the Centers for Disease Control and Prevention and Administrator of the Agency for Toxic Substances and Disease Registry from 1993 to 1998, and was nominated and confirmed to serve as the sixteenth Surgeon General of the United States from 1998 to 2002. He concurrently served as assistant secretary of health and human services from 1998 to January 2001. Satcher held the rank of full Admiral in the U.S. Public Health Corps and, upon his departure from the Office of Surgeon General, he became a fellow at the Kaiser Family Foundation. In the fall of 2002, Satcher began his service as director of the National Center for Primary Care at Morehouse School of Medicine, and in December 2004, he was named interim president at Morehouse School of Medicine.

As U.S. Surgeon General and Assistant Secretary of Health and Human Services, Satcher released reports on many topics, including: tobacco and health; mental health, race and ethnicity, suicide prevention, oral health, sexual health and responsible sexual behavior, youth violence prevention and obesity. He made it a priority to attempt to eliminate racial and ethnic disparities in the nation’s health care system.

Satcher is the recipient of eighteen honorary degrees and numerous distinguished honors. Satcher and his wife live in the greater Atlanta area. They are the parents of four adult children.

Dr. David Satcher was interviewed by The HistoryMakers on March 16, 2006.

See how The Honorable Dr. David Satcher is related to other HistoryMakers