Information about The Honorable Doris Bunte 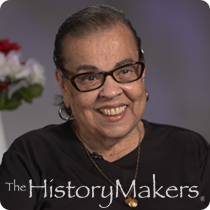 Favorite Color:
Orange
Favorite Food:
Fried Chicken
Favorite Time of Year:
Spring
Favorite Quote:
Being Poor Is Not The Result Of A Flaw In Character.

Favorite Color:
Orange
Favorite Food:
Fried Chicken
Favorite Time of Year:
Spring
Favorite Quote:
Being Poor Is Not The Result Of A Flaw In Character.

State representative and city official Doris Bunte was born on July 2, 1933 in New York City to Evelyn Johnson Brown and Herbert Brown. She attended Food Trades Vocational High School, but left before receiving her diploma. In 1953, she moved to Boston, Massachusetts with her three children, and earned her G.E.D. in 1968. Bunte enrolled in Harvard University in 1978, where she earned a certificate in environmental studies from the Harvard Graduate School of Design and her M.A. degree in education in 1982.

She held positions on the National Rent Board and in the National Tenants Organization. She also served on the Critical Minority Affairs Committee and the National Association of Housing and Development, as well as the Citizens Housing and Planning Association. Bunte received recognition for her contributions, including being featured in a mural at the historic Alvah Kittredge House and in an exhibit called “Portraits in Black: Gaining Ground, Holding Office” in the Museum of African American History, Boston and Nantucket in 2004.

Doris Bunte was interviewed by The HistoryMakers on October 19, 2016.

See how The Honorable Doris Bunte is related to other HistoryMakers
Donate Now
Click Here To Explore The Archive Today!