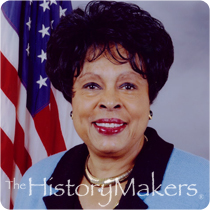 See how The Honorable Diane E. Watson is related to other HistoryMakers
Donate Now

Former U.S. Congresswoman and foreign ambassador Diane E. Watson was born on November 12, 1933 in Los Angeles, California in a devout religious household. Upon graduating from Dorsey High School (Los Angele) in the late 1940s, Watson attended Los Angeles City College. She went on to receive her B.A. degree in education from University of California at Los Angeles (UCLA) in 1956, and her M.A. degree in school psychology from California State University in 1958. In 1987, Watson earned her Ph.D. in education administration from Claremont Graduate School; and later, completed courses at the Kennedy School of Government at Harvard University.

Watson began her professional career in 1969 as a psychologist with California State University. Then, from 1971 to 1975, she worked as a health occupation specialist with the Bureau of Industrial Education of the California Department of Education. In 1975, Watson became the first African American woman to serve on the Los Angeles Unified School District Board of Education. There, she worked to expand school integration and make academic standards more rigorous. In 1978, Watson became the first African American woman to be elected to the California State Senate where she played a major role in formulating the state of California’s TANF program. Watson also sought funding to help teen mothers complete their education and gain employment through the Cal-Learn program. In 1993, Watson authored the California Birth Defects Monitoring Program Act and the Residential Care Facilities Act. She introduced legislation to improve food health safety requirements for restaurants in 1997, and also played a key role in the enactment of legislation to promote breast cancer research. She served as chair of the Senate Health and Human Services Committee from 1981 to 1998, and also served on the Senate Judiciary Committee.

At the end of her senate term in 1999, President Bill Clinton appointed Watson to serve as the United States Ambassador to the Federated States of Micronesia. Watson continued in the role of U.S. Ambassador until 2001 when she was elected to fill the vacancy of the late U.S. Representative Julian Dixon under a special election. She was re-elected in 2002 and 2004 to serve two consecutive terms, and retired in 2011.

See how The Honorable Diane E. Watson is related to other HistoryMakers
Donate Now
Click Here To Explore The Archive Today!