Information about The Honorable DeLawrence Beard 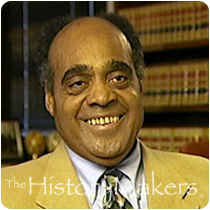 See how The Honorable DeLawrence Beard is related to other HistoryMakers

The Honorable DeLawrence Beard was born in Okolona, Arkansas, on December 26, 1937. Graduating from high school in 1956, Beard joined the Navy, and served until 1959, when he was honorably discharged. He then enrolled in the University of Missouri, where he received a B.A. in political science in 1964. Beard began law school at Missouri in 1964, but withdrew a year later. He would later go on to enter the University of Baltimore School of Law in 1967, earning a J.D. in 1970. In 1977, Beard graduated from the Georgetown University Law Center with an LL.M.

After earning his B.A., Beard joined IBM Corporation in Washington, D.C., where he was a senior marketing representative. Even after earning his law degree, Beard stayed on with IBM, finally going on to practice law in 1974. That year, he began as a prosecutor, first in juvenile court, and the next year, moving to felony cases. By 1978, Beard had moved to the position of senior assistant state's attorney for Montgomery County, Maryland, supervising a team of attorneys and prosecuting serious offenses. Continuing his climb, Beard became a judge in the District Court for Montgomery County in 1982, and in 1984 became an associate judge to the Sixth Judicial Circuit of Maryland, which is also the appellate court. In 1996, Beard advanced to the position of chief judge for the Sixth Judicial Circuit Court, where he remains today.

Beard is also currently an adjunct professor of law at both the University of Maryland and American University in Washington, D.C. He has lectured to incarcerated individuals, giving them advice on life skills. Beard is a member of several Bar Associations and has received a Governor's Citation in 1998 for meritorious service to the state of Maryland.

Beard is married to Lillian, a pediatrician.

See how The Honorable DeLawrence Beard is related to other HistoryMakers
Click Here To Explore The Archive Today!