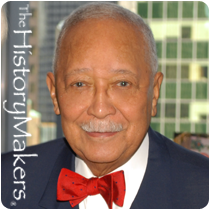 See how The Honorable David N. Dinkins is related to other HistoryMakers

David Norman Dinkins was born on July 10, 1927, in Trenton, New Jersey. He was raised in Trenton until the Depression, when his family moved to Harlem. Dinkins served in the United States Marine Corps during World War II. In 1950, he received his B.S. degree in mathematics from Howard University. Dinkins went on to graduate from Brooklyn Law School in 1956 with his LL.B. degree and then started a private law practice that he maintained until 1975.

Dinkins began his public service career in 1966 when he was elected to the New York State Assembly. He was president of the New York City Board of Elections, and served as City Clerk for ten years before his election as President of the Borough of Manhattan in 1985.

Dinkins was elected as the first African American Mayor of the City of New York in 1989. As Mayor, Dinkins initiated a program called “Safe Streets, Safe City: Cops and Kids,” reducing crime and expanding opportunities for New York’s children. He also established the Beacon community centers that offer New Yorkers a mix of social services ranging from recreation and job training in public schools after school hours.

Upon leaving office in 1993, Dinkins went on to serve as professor in the Practice of Public Affairs at the Columbia University School of International and Public Affairs, where he continues to teach and mentor young people striving towards careers of service. He also serves on the school’s advisory board and hosts its annual Dinkins Leadership & Public Policy Forum. In 2003, the David N. Dinkins Professorship Chair in the Practice of Urban & Public Affairs was established at Columbia University.

Dinkins serves on the board of several non-profit and charitable organizations, including Association to Benefit Children; Children’s Health Fund; The Nelson Mandela Children’s Fund; Posse Foundation; Coalition for the Homeless, and USTA Serves. He is chairman emeritus of the National Black Leadership Commission on AIDS and the Constituency for Africa (CFA), and serves on the steering committee of the Association for a Better New York and the New York Urban League Advisory Council. He serves on the board of New York City Global Partners and is a member of the Council on Foreign Relations and the National Advisory Board of the International African American Museum.

See how The Honorable David N. Dinkins is related to other HistoryMakers
Click Here To Explore The Archive Today!