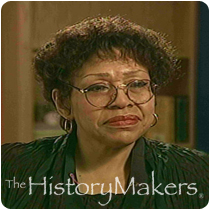 Constance “Connie” Arlene Howard was born on December 14, 1942 on the South Side of Chicago, Illinois. The daughter of Henry and Thelma Bozeman, she was the second of four children. Howard attended James Wadsworth Elementary School and Hyde Park High School before enrolling at Chicago Teacher’s College, now Chicago State University. In 1963, Howard married Phillip Howard, Jr. and the following year a son, Phillip III, was born. Howard spent much of her time over the next decade actively participating in the political campaigns of former Illinois Attorney General and State Comptroller Roland Burris and others. In 1983, Howard decided to run for office herself.

Howard was elected Democratic State Central Committeeperson from the 1st Congressional District, a position she still holds today. In 1994, while campaigning for re-election, Howard also decided to run for a seat in the Illinois General Assembly. She won both races.

As a State Representative, Howard serves as Chairperson of the Committees on Computer Technology and Children & Youth. She also serves on the Committees of Appropriations-Higher Education, Labor & Commerce and Higher Education. A member of the Chicago Urban League, Operation PUSH and Alpha Kappa Alpha Sorority, Inc., Howard has been honored by the Illinois Coalition Against Domestic Violence, the Chicago Teacher’s Union and numerous other organizations.

Howard was interviewed by The HistoryMakers on July 20, 2000.

See how The Honorable Constance "Connie" Howard is related to other HistoryMakers
Donate Now
Click Here To Explore The Archive Today! 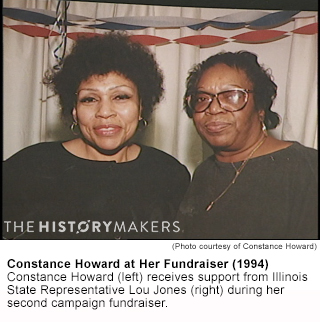 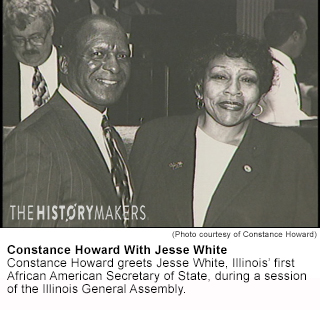