Information about The Honorable Clarence Williamson 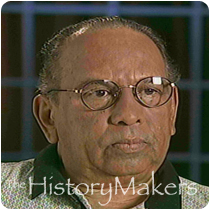 See how The Honorable Clarence Williamson is related to other HistoryMakers

Clarence Bernard Williamson was born on June 1, 1930 in Chicago, Illinois to Robert and Anne Williamson. He spent much of his childhood working behind the counter of his father’s grocery store. Williamson graduated from St. Elizabeth High School and enrolled at Roosevelt University. At the age of twenty-one, Williamson married Marion Degraffinreed, and continued to work in his father’s store until he was hired to manage a store owned by prominent Congressman William Dawson. Williamson dabbled in local politics, serving as a precinct captain for Alderman Robert Miller’s 6th Ward. In 1966, Williamson found employment as an underwriter for New York Life Insurance. After a few years, Williamson returned to college, earning an advanced degree in Corrections while working for the Cook County Department of Probation.

In 1980, Williamson was appointed to the Illinois House of Representatives, filling a vacancy left by Eugene Barnes after his appointment to the Chicago Transit Authority. Williamson decided to run for another term, but was defeated.

Williamson continues to work in the insurance field, acting as President of Vital Associates Incorporated, an insurance firm. The father of one son, Clarence Jr., Williamson has been a member of several organizations, including Operation PUSH, the American Correctional Association and Alpha Phi Alpha Fraternity, Inc.

Williams was interviewed by The HistoryMakers on August 9, 2000.

See how The Honorable Clarence Williamson is related to other HistoryMakers
Click Here To Explore The Archive Today!