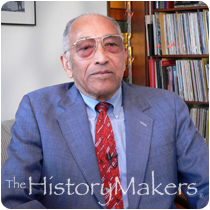 See how The Honorable Charles Z. Smith is related to other HistoryMakers

Retired Justice of the Washington Supreme Court and prosecutor for the United States Department of Justice, Charles Zellender Smith was born on February 23, 1927, in Lakeland, Florida. Son of John R. Smith, Sr., a Cuban immigrant, and Eva Love Smith, he attended school in Franklin, North Carolina at age three, Washington Park School in Lakeland and Hungerford School in Maitland, Florida. Mentored by Dr. William H. Gray, Jr., President of Florida A&M College, he served as Gray’s administrative assistant. From 1945 to 1946, Smith served in the United States Army as a court reporter. He later joined the Gray family in Philadelphia attending Temple University, where he earned his B.S. degree in 1952. Smith then moved to Seattle, Washington, where he entered the University of Washington Law School. He was one of four minority students in a class of 120. He was the only African American or person of color in the graduating class. While in law school, Smith met Hawaii-born Eleanor Martinez, whom he married in 1955.

After graduating from law school, Smith served as a law clerk for Supreme Court Justice Matthew W. Hill. From 1956 to 1960, he served as a Deputy Prosecuting Attorney for King County. In 1961, Smith was recruited by U.S. Attorney General Robert F. Kennedy to join his staff. Smith’s assistance was sought by the Attorney General in investigating mismanagement of the Central States Teamsters Pension Fund. He led a team conducting grand juries around the country, culminating in indictment and successful prosecution of James R. Hoffa and five business men for mail fraud and wire fraud in the Northern District of Illinois in 1964.

In 1965, Smith returned to Seattle where he became the first African American or person of color to become a judge in the State of Washington, being appointed as Judge of the Seattle Municipal Court. In 1966, again as a “first,” he was appointed to the King County Superior Court and subsequently reelected unopposed until he left the court in 1973. Also, in 1973, Smith was appointed Professor of Law and Associate Dean at the University of Washington Law School where he served until his retirement in 1986. Later in 1973 Smith was commissioned in the United States Marine Corps Reserve where he served in the Judge Advocate Division as a military judge until his retirement as a Lieutenant Colonel in 1986.

Smith served as President of the American Baptist Churches, USA in 1976 and 1977 and participated with the National Inter-religious Task Force on Soviet Jewry. He served as a delegate to Task Force follow-up conferences in Rome, Italy, Belgrade, Yugoslavia and Madrid, Spain.

On July 18, 1988, Smith became the first African American or person of color to serve on the Washington Supreme Court. He served three terms retiring in 2002. In 1999, he was appointed by President William J. Clinton to the U.S. Commission on International Religious Freedom, created by Congress to monitor the status of freedom of thought, conscience and belief abroad. In 2001, the Student Bar Association at the University of Washington Law School established the Charles Z. Smith Public Service Scholarship. He received the Distinguished Service Award from the National Center for State Courts in 2004 and was honored by Pioneer Human Services in Seattle with naming of one of its low cost housing properties as the Chares Z. Smith House.

Smith lived in Seattle, Washington with his wife, Eleanor Martinez. The couple had four adult children and six grandchildren.

See how The Honorable Charles Z. Smith is related to other HistoryMakers
Click Here To Explore The Archive Today!