Information about The Honorable Charles Walker 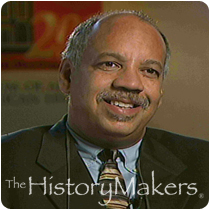 Favorite Color:
Blue
Favorite Food:
Chicken
Favorite Time of Year:
Fall
Favorite Vacation Spot:
Martha's Vineyard, Massachusetts, Caribbean
Favorite Quote:
Any Landing That You Can Walk Away From Is A Good One.

Favorite Color:
Blue
Favorite Food:
Chicken
Favorite Time of Year:
Fall
Favorite Vacation Spot:
Martha's Vineyard, Massachusetts, Caribbean
Favorite Quote:
Any Landing That You Can Walk Away From Is A Good One.

See how The Honorable Charles Walker is related to other HistoryMakers

Attorney Charles Edward Walker, Jr., was born on May 1, 1951, in Anchorage, Alaska, to Marguerite Pearl Lee and Colonel Charles E. Walker, Sr. Walker received his B.A. degree in political science from the University of California, Santa Barbara, in 1973 and his J.D. degree from Boston College Law School in 1978.

In 1974, Walker began working as an English teacher for the Oxnard Union High School District in Oxnard, California. After leaving the school district in 1975, Walker studied at the London School of Economics, where he earned his B.S. degree in 1977. After returning to the United States, Walker moved to Massachusetts and worked as an attorney for the Department of Agriculture Office of General Counsel. He then served as a law clerk under the Honorable James Lynch for the Boston Superior Court until 1980.

After leaving the Boston Superior Court, Walker worked as a law clerk at the Massachusetts Court of Appeals for the Honorable Frederick L. Brown, who was the first African American to serve on the U.S. Court of Appeals in Massachusetts. Walker resigned from this position in 1981 and began working as a teaching fellow for Suffolk University Law School’s Council on Legal Education Opportunity, while at the same time serving as an instructor at the University of Massachusetts. Shortly thereafter, Walker began working as the Assistant Attorney General for the Commonwealth of Massachusetts under then Attorney General Francis X. Bellotti. There, Walker defended state agencies and officials in all the state and federal trial and appellate courts of Massachusetts.

After leaving the Commonwealth of Massachusetts in 1987, Walker worked briefly as an assistant professor at the New England School of Law, before beginning a six year tenure as the Chairman of the Massachusetts Commission Against Discrimination (MCAD), which ended in 1998. In 2000, Walker served as an administrative judge with the Commonwealth of Massachusetts’ Department of Industrial Accidents, where he completed a four year term ending on September 20, 2004.

Walker has received several awards for his success in the legal arena, including the Massachusetts Lawyers Weekly’s “Top Ten Lawyers of the Year” in 1997 and the 75th Anniversary Distinguished Alumnus Award from Boston College Law School’s Alumni Association.

See how The Honorable Charles Walker is related to other HistoryMakers
Click Here To Explore The Archive Today!