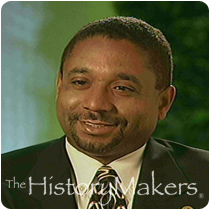 See how The Honorable Charles Morrow, III is related to other HistoryMakers
Donate Now

Charles Gay Morrow III was born on July 21, 1956 in Chicago, Illinois. His mother worked for the Chicago Housing Authority for twenty-six years, and his father was an assistant to Illinois Representative Raymond Ewell. The oldest of two children, Morrow attended De La Salle High School and was an honor student despite suffering from a speech impediment. In 1974, he entered the Illinois Institute of Technology, which at the time had only sixty-seven African American students.

Upon graduation, Peoples Gas and the Coca-Cola Company hired Morrow, where he worked for eighteen years. Then Morrow worked for the Metropolitan Sanitary District of Chicago. Morrow's interest and expertise in sanitation and public works made him a viable political candidate and would shape the focus of his political career.

Despite opposition by then-mayor Eugene Sawyer, Morrow was elected to the Illinois House of Representatives in 1986 from the 26th District. Since then, Morrow has acted as chairman of the Appropriations-Public Safety Committee, co-chair of the Legislative Printing Unit and the vice-chairman of the Public Utilities Committee. A participant in the National Conference of Black Legislators, Morrow also finds time for membership in his neighborhood block club. On July 17, 1993, Charles Morrow married Sherri Harris. They are the parents of three sons, named Charles Jr., Michael and Stephen.

See how The Honorable Charles Morrow, III is related to other HistoryMakers
Donate Now
Click Here To Explore The Archive Today!