Information about The Honorable Charles Hayes 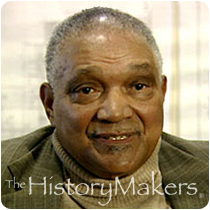 See how The Honorable Charles Hayes is related to other HistoryMakers

Labor leader and U.S. congressman Charles A. Hayes was born on February 17, 1918 in Cairo, Illinois, and graduated from Cairo's Sumner High School in 1935.

While working as a machine operator in his hometown Hayes helped to organize the United Packinghouse Workers of America, which later became prominent in union reform movements for women and minorities. Hayes remained involved with the labor union movement for fifty years and eventually became vice president of the United Food and Commercial Workers Union.

In 1983, Hayes was elected as a member of the United States House of Representatives, a seat previously occupied by Chicago, Illinois Mayor Harold Washington. Hayes played a large role in Washington's mayoral campaign by lobbying, organizing people and raising money through his union. During his career in Congress, Hayes made a number of changes. He authored and introduced the School Improvement Act of 1987, which was later passed by the House. This act allocated millions of dollars to public schools across the country, allowing them to purchase textbooks, computers and supplies. He also introduced the Economic Bill of Rights, which outlined a plan for the equal distribution of national wealth. In addition, Hayes was an active member of Congress’s Education and Labor Committee, as well as the Small Business Committee. He served as a member of the U.S. House of Representatives until January 3, 1993.

Hayes also was an ardent supporter of the civil rights movement. He was one of the founding members of Operation PUSH with Reverend Jesse Jackson, Sr. Also, Hayes worked with Reverend Dr. Martin Luther King, Jr. in the Southern Christian Leadership Conference.

A resident of Chicago, Illinois for most of his life, Hayes died from complications of lung cancer on April 8, 1997 at the age of 79.

Charles Hayes was interviewed by The HistoryMakers on January 25, 1993.

See how The Honorable Charles Hayes is related to other HistoryMakers
Click Here To Explore The Archive Today!