The Honorable Charles B. Rangel

Information about The Honorable Charles B. Rangel 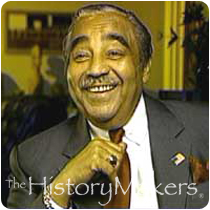 See how The Honorable Charles B. Rangel is related to other HistoryMakers

New York Congressman and Harlem native Charlie Rangel was born in New York on June 11, 1930. Raised by his mother and maternal grandfather, a Pullman porter and elevator operator, Rangel grew up in the streets of New York. After dropping out of high school, Rangel served in the U.S. Army during the Korean War, where he was seriously wounded in battle and received the Bronze Star and Purple Heart.

After his return from Korea and near-death experience, Rangel enrolled at New York University, earning a B.A. in 1957 and receiving his law degree from St. John's University Law School in 1960. In 1961, Attorney General Robert Kennedy appointed Rangel assistant U.S. attorney for the Southern District of New York. In 1967, Rangel won election to the New York State Assembly. In 1971 Rangel ran for U.S. Congress and defeated the famous Reverend Adam Clayton Powell, Jr. in a historic election. Rangel's victory inaugurated the first of his seventeen consecutive terms as representative of the Fifteenth Congressional District of New York. This district contains the neighborhood of Harlem.

Rangel's tenure in Congress has been marked by a continued activism and concern for his constituency. Rangel was one of the founding members of the Congressional Black Caucus and served at one time as its chairman. He has also been active on issues of trade and human resources. In 1987, Rangel, one of the leading opponents to South African apartheid, pushed the Internal Revenue Service to eliminate tax credits for taxes paid to the apartheid government of South Africa. In 1995, he helped to create a federal "empowerment zone" in Manhattan and authored the low-income tax credit to stimulate the development of affordable housing in urban areas. Early in 2003, Rangel proposed the reinstatement of the military draft as a way to deter the use of force and promote a peaceful resolution to the standoff in Iraq. In 2007, Rangel became the chairman of the House Ways and Means Committee.

Rangel and his wife, Alma, have two children, Steven and Alicia. The Rangels, active still in many civic and community organizations, maintain their home in Harlem.

See how The Honorable Charles B. Rangel is related to other HistoryMakers
Click Here To Explore The Archive Today!