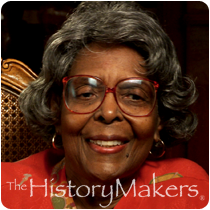 Former U.S. Congresswoman of Illinois's 7th district Cardiss Collins was born on September 24, 1931, in St. Louis, Missouri, to Finley and Rosia Mae Cardiss Robertson. When she was ten years old, she moved with her family to Detroit, Michigan, where she attended the Detroit High School of Commerce. After high school, Collins moved to Chicago, Illinois to find a job. She worked as a stenographer with the Illinois Department of Labor while simultaneously attending Northwestern University in Evanston, Illinois, where she earned her B.S. degree in accounting. She was promoted to secretary, then accountant at the Illinois Department of Revenue before becoming the revenue auditor. In 1958, Collins married George W. Collins, and in 1959, their son, Kevin, was born. Collins served as committeewoman of the Twenty-fourth Ward Regular Democratic Organization, where she gained her first political experience. She also participated in her husband’s campaigns for alderman, committeeman and U.S. Representative.

Tragically, on December 8, 1972, George W. Collins died in a plane crash. Six months later, Collins was elected to Congress in the June 5, 1973 special election to replace her husband. In 1978, she became the first African American and first woman to chair the Manpower and Housing subcommittee of the House Government Operations Committee and to be named Democratic whip-at-large in the House. One year later, she was elected president of the Congressional Black Caucus. From 1983 to 1991, she served as chair of the Government Activities and Transportation (GAT) Subcommittee, where she helped pass laws that controlled the transport of toxic materials and helped provide more secure air travel. She also introduced the Non- Discrimination in Advertising Act, which denied federal tax write-offs to major advertising firms that ignored black-owned communications media, both print and broadcast. In 1990, she wrote a law that expanded Medicare coverage for screening mammography for millions of elderly and disabled women, and in 1991, she was named chairwoman of the Energy and Commerce Subcommittee on Commerce, Consumer Protection, and Competitiveness. In Congress, she focused on establishing universal health insurance, providing for gender equity in college sports, and reforming federal child care facilities. In 1993, she authored the Child Safety Protection Act, which requires warning labels on dangerous toys and federal safety standards for bicycle helmets. In 1996, Collins chose to retire and did not run for re-election.

The recipient of honorary degrees from Barber-Scotia College, Spelman College, and Winston-Salem State University, Collins was elected to the Black Women’s Hall of Fame in 1982. In 1990, the Congressional Black Caucus presented Collins with the William L. Dawson Award for Legislative Development, and in 1991, she was honored with an American Black Achievement Award for government service. The American Advertising Foundation established the Cardiss Collins Scholarship for Diversity in Advertising at the University of Illinois in 1996, which provides a full-tuition scholarship to a freshman University of Illinois student in advertising.