Information about The Honorable Calvin Smyre 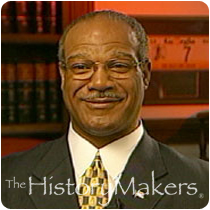 Favorite Color:
Blue
Favorite Food:
Chicken
Favorite Time of Year:
Summer
Favorite Vacation Spot:
Florida
Favorite Quote:
If you ever see a turtle sitting on a fence post, you know he didn’t get there by himself.

Favorite Color:
Blue
Favorite Food:
Chicken
Favorite Time of Year:
Summer
Favorite Vacation Spot:
Florida
Favorite Quote:
If you ever see a turtle sitting on a fence post, you know he didn’t get there by himself.

See how The Honorable Calvin Smyre is related to other HistoryMakers

State Representative of Georgia, Calvin Smyre was born on May 17, 1947. Smyre studied business administration at Fort Valley State University, where he earned his B.S.

In 1974, at the age of twenty-six, Smyre was elected to the Georgia State House of Representatives, as its youngest member at the time. He is known for his early efforts as an organizer and director of the "War on Poverty" program. In 1986, Governor Joe Frank Harris appointed Smyre the floor leader. It was the first time a black representative held this position in Georgia. Smyre sponsored successful legislation on the construction of the Georgia Dome, the honoring of Martin Luther King, Jr.'s birthday as a state holiday and the fight to remove the Confederate battle emblem from the state flag. He has served as a member of state house committees on appropriations, ethics, higher education and special rules. As Chairman of the House Rules Committee, he steered hundreds of successful bills to the full House, including stiffer restrictions on teen and drunken drivers.

Smyre has also been active on a national level, acting as a delegate to every Democratic National Convention since 1980. In 1984, he was the first African American from Georgia elected to the Democratic National Committee. As campaign chairman and advisor, he helped Jimmy Carter and Bill Clinton win their presidential campaigns. He also served as an adviser to former Vice President Al Gore during Gore's run for president in 2000.

Smyre has also been a key figure in the world of finance. He is the executive vice president of corporate affairs for Synovus Financial Corporation, a multi-financial services company with more than $14.9 billion in assets. He is also the chairman, CEO of the Synovus Foundation. He acts as the secretary of the National Black Caucus of State Legislators. He sits on the Board of Trustees of the Medical College of Georgia Foundation; the Morehouse School of Medicine; the Jack D. Hughston Foundation and the Fort Valley State University Foundation as its Chair.

See how The Honorable Calvin Smyre is related to other HistoryMakers
Click Here To Explore The Archive Today!