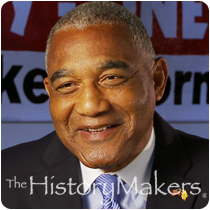 See how The Honorable C. Jack Ellis is related to other HistoryMakers

Ellis enlisted in the U.S. Army, where he served as a combat soldier and paratrooper in Vietnam in the 101st Airborne Division. He was awarded the Combat Infantryman’s Badge, three Bronze Stars, the Army Commendation Medal for Heroism and the Purple Heart for wounds received in combat. Ellis worked with Reverend Jesse Jackson’s second presidential campaign in 1988, and then went to work for the Census Bureau in from 1988 to January of 1991, and managed a cable television system on St. Croix, U.S. Virgin Islands. He also hosted a public access television show focusing on public and political affairs. In 1988, Ellis helped to manage Reverend Jesse Jackson’s presidential campaign for the State of Georgia.

In 1999, Ellis was elected the 40th mayor of Macon, Georgia, becoming the first African American Mayor in the City’s 176-year history. He was then re-elected In 2003. During his tenure as Mayor, Ellis’s administration was responsible for approximately $1 million in loans to disadvantaged businesses. Under Ellis’s leadership, the City successfully won a federal Hope VI grant to improve public housing, in addition to other grants and federal aid. His administration constructed over 300 new affordable housing units and eliminated over 2000 sub-standard houses. Also, during Ellis’s administration, the City of Macon was designated as a city of excellence by the Georgia Municipal Association and awarded the City Livability Award by the
U.S. Conference of Mayors. First Lady Laura Bush designated Macon as a “Preserve American Community.” Ellis also created the C. Jack Ellis Youth Foundation which assisted underprivileged and special needs children in America, the Caribbean and Africa. After Ellis left office in 2007, he was appointed honorary consul for Uganda to promote the country in the southeastern United States. Three years later, Ellis announced that he would seek a third term as Mayor of Macon. In 2011, Ellis officially began his mayoral campaign.

Ellis has received many distinctions and honors, including being named one of the top leaders in the State of Georgia. As Mayor, Ellis served as vice president for the World Conference of Mayors for Tourism and Investment and chairman of the International Affairs Committee for the National Conference of Black Mayors. Ellis is a member of the Veterans of Foreign Wars, Disabled American Veterans, the NAACP and a 32nd degree Mason and a Shriner. His is the father of five children, and lives in Atlanta Georgia.

Clarence Jack Ellis was interviewed by The HistoryMakers on April 22, 2011.

See how The Honorable C. Jack Ellis is related to other HistoryMakers
Click Here To Explore The Archive Today!