Information about The Honorable Bobbie Steele 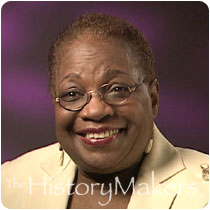 Cook County Commissioner Bobbie L. Steele was born October 18, 1937, in Cleveland, Mississippi, to Mary and Abraham Rodgers. Steele has served as a commissioner since 1986, making her the longest serving African American woman in the history of Cook County government.

The oldest of seven siblings, Steele left her hometown after graduating from high school in 1954. She attended Alabama A&M University in Huntsville before moving to Chicago. Marrying Robert P. Steele in 1956, Bobbie Steele completed a bachelor's degree in elementary education in 1966, attending night classes at the Chicago Teachers College (now Chicago State University). She immediately went to work in the Chicago Public Schools. Returning to studies of her own, Steele earned an M.A. degree from Roosevelt University in 1982.

With significant community and political organizing experience under her belt, Steele sought election to the Cook County Board of Commissioners with the support of Mayor Harold Washington. In 1986, Steele won in a landslide and has worked since that time to ensure minority and female participation in county contract bids. Steele also co-sponsored Cook County's human rights and ethics ordinances and is the first and only African American woman to serve as chairperson of the Finance Committee of the Forest Preserve District of Cook County.

Steele has served nationally in leadership positions, chairing the National Association of Counties’ Deferred Compensation Advisory Committee and serving as president of the National Association of Black County Officials. Locally, she has served on the Women's Committee of Chicago, the Chicago Women's Center, Operation Brotherhood, the Aids Foundation of Chicago and numerous other organizations. Steele and her husband have seven adult children and twelve grandchildren.

Steele was interviewed by The HistoryMakers on July 1, 2002.

See how The Honorable Bobbie Steele is related to other HistoryMakers
Donate Now
Click Here To Explore The Archive Today!