Information about The Honorable Blanche Manning 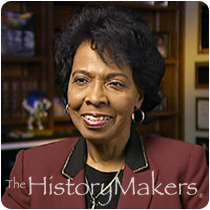 See how The Honorable Blanche Manning is related to other HistoryMakers

The appointment of Blanche M. Manning as United States District Court judge marks a momentous moment in Illinois history. Born December 12, 1934, in Chicago, Manning discovered her passion for law while working as a legal secretary to finance a bachelor's degree in education at DePaul University. She taught in Chicago public schools before pursuing a J.D. at John Marshall Law School. A jazz musician and enthusiast, Manning also studied music at Roosevelt University. She earned a master's of the laws of judicial process from the University of Virginia Law School.

In 1968, Manning began an exemplary legal career as assistant prosecutor in the Cook County State's Attorney's Office. She subsequently worked as an attorney for the United States Equal Employment Opportunity Commission, United Airlines and the United States Attorney's Office. Manning was promoted to judge of the Circuit Court of Cook County in 1979. When she was elected to the Illinois Appellate Court in 1987, she became the first African American female member of that court. Accepting an appointment by President Bill Clinton, Manning began a lifetime position as district court jurist for the Northern District of Illinois in 1994. Her role in high-profile cases is chronicled in newspapers and books. Manning, who has contributed to workshops at the University of Chicago and Harvard law schools, served as adjunct professor of law at DePaul University College of Law. She is a fellow of the American Bar Association.

Manning has played in numerous jazz bands, and she regularly assembles her own band, Diversity, composed of musicians of diverse backgrounds. She has been involved in community development, and she received a "We Care" Role Model Award from Chicago police and public schools for ten consecutive years. Manning and her husband, William, whom she married in 1957, raised six nieces and nephews.

See how The Honorable Blanche Manning is related to other HistoryMakers
Click Here To Explore The Archive Today!