Information about The Honorable Bernard Parks 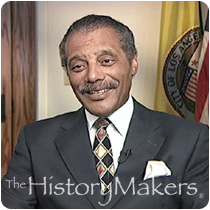 Los Angeles city councilman Bernard Parks was born in Beaumont, Texas, on December 7, 1943; his family moved to Los Angeles while Parks was still young. While attending Holy Spirit High School, Parks played football and served as the class president. After graduating from high school, Parks attended Los Angeles City College from 1961 until 1963 before being hired at General Motors. Parks then enrolled in Los Angeles’ police academy, and in February of 1965, was sworn in as an officer at a time that police cruisers were being desegregated.

Parks was promoted to sergeant in 1970. That same year, Parks also began attending Pepperdine University, where he earned his B.S. degree in 1976 in public management, and simultaneously earned his M.A. degree in public administration from the University of Southern California. While attending college, Parks was promoted to lieutenant, and in 1977, became a captain with the Los Angeles Police Department (LAPD). By 1980, Parks was serving as commander, and in 1988, he was named deputy chief of police for Los Angeles. In 1992, Parks became assistant chief of police; two years later, following an institutional reorganization, Parks returned to the role of deputy chief. In August of 1997, Parks was named Los Angeles chief of police, a position he held until 2002.

In his various executive roles with the police department, Parks was responsible for overseeing task forces on anti-terrorism, internal affairs, and organized crime. As chief of police, Parks overhauled of the department, initiating a community policing network; he also worked to stem corruption within the LAPD, sending former police officers to jail for gross violations of the law. During his tenure as chief of police, crime in Los Angeles fell by thirty-five percent.

After leaving the police department, Parks successfully ran in 2002 for a seat on the Los Angeles City Council. While serving in this office, Parks worked to modernize the Los Angeles International Airport and to bring the National Football League back to Los Angeles.

Parks is a member of several local, statewide and national law enforcement organizations, as well as a founding member of the Oscar Joel Bryant Foundation, which aims to foster growth and understanding between black police officers and their communities. Parks is an accomplished speaker and is widely considered to be an authority on criminal justice issues.

See how The Honorable Bernard Parks is related to other HistoryMakers
Donate Now
Click Here To Explore The Archive Today!