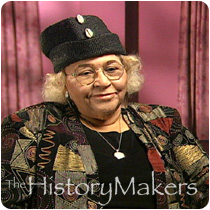 Barbara Lett Simmons was born on June 4, 1927, in Battlecreek, Michigan; she was raised in a traditional Seventh Day Adventist household, her mother working as a homemaker and her father was a lumberjack and coal contractor. In 1945, Simmons earned her high school diploma from Battlecreek Central High School, where she was a member of the volleyball, basketball, and debate teams; active in the Spanish and yearbook clubs; and worked on the school newspaper.

In 1949, Simmons earned her bachelor’s of art degree in sociology and education from Western Michigan University. While at WMU, Simmons was a member of the debate team, International Relations Club, and vice president of her senior class. From 1949 until 1962, Simmons taught in Detroit, Michigan, public schools, until her family relocated to Washington, D.C. From 1962 until 1965, Simmons taught in Montgomery County, Maryland (a Washington, DC suburb), public schools and was one of the first African American teachers to integrate its public school system. From 1967 until 1968 Simmons served as education coordinator for the Washington, D.C., Poverty Program. From there, Simmons worked for the Department of Education, training instructors to teach adult students until 1972; her work would become a national training module for fourteen states.

In 1972, Simmons formed BLS and Associates, a staff development and training consulting firm; the following year she was elected to the Washington, D.C. Board of Education, where she served until 1986. As a school board member, Simmons vigorously fought for the rights of poor and disabled students. In 1977 Simmons created and hosted a cable television and radio program entitled Educationally Speaking.

Active in the political process as well, during the 2000 presidential race Simmons made headlines when she, as a Democratic elector from the District of Columbia, abstained from voting for Al Gore in the Electoral College, going against expectations; this act was in protest of the District's lack of a voting representative in Congress. In 2004, Simmons led an unsuccessful effort to recall Washington, D.C., mayor Anthony Williams. Simmons was the recipient of numerous awards and honors for her civic leadership and work in education.

See how The Honorable Barbara Lett Simmons is related to other HistoryMakers
Click Here To Explore The Archive Today!