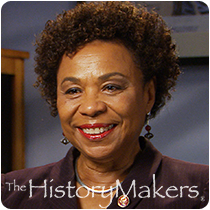 U.S. Congresswoman Honorable Barbara Lee was born on July 16, 1946 in El Paso, Texas. Her biological father, James Lewis, was a veteran of the Korean War; her mother, Mildred Massey, a clerk. In 1960, Lee’s family moved to the San Fernando Valley in Los Angeles, California. As a teenager, she immersed herself in music and won two music achievement awards from the Rotary Club and the Bank of America. Lee graduated from San Fernando High School in 1964. She worked for one year in the California Department of Labor Statistics, and then went on to receive her B.A. degree in psychology from Mills College in 1973 and her M.A. degree in social work from the University of California at Berkeley in 1975.

Upon graduation, Lee worked for Congressman Ronald V. Dellums after serving as a legislative intern there during graduate school. While there, she managed Congressman Dellums’ offices in Washington, D.C. and Oakland, California for eleven years and eventually rose to the position of senior adviser. In 1990, Lee was elected to the California State Assembly; and, in 1996, she was elected to the California State Senate. As a Democrat, she worked successfully with California’s Republican administration in those years and sponsored sixty-seven bills that were signed into law by then-Republican Governor Pete Wilson. Lee’s political agenda focused on issues such as education, public safety, environmental protection, health, labor, and women’s rights. In 1998, she became the first woman to represent the State of California’s then-9th Congressional District in the U.S. House of Representatives and served as chair of the Congressional Black Caucus from 2009 to 2011. She was later elected as the first woman to represent the California’s now-13th Congressional District in 2013. Lee also published a memoir, Renegade for Peace and Justice: A Memoir of Political and Personal Courage (2008).

Lee’s honors and distinctions include receiving the Dean’s Appreciation Award from the University of California at Berkeley School of Social Welfare, and the Willie L. Brown, Jr., Leadership Award, both in 2001. Lee was also nominated for the Alfred R. Nobel Peace Prize. In 2009, The National Urban League honored her with the Congressional Leadership Award; and, in 2012, she received the Lifetime Legacy Achievement Award from the United Nations Association. Lee is the mother of two sons, Tony Lee and Craig Lee.

U.S. Congresswoman Barbara Lee was interviewed by The HistoryMakers on November 5, 2013.