Information about The Honorable Barack Obama 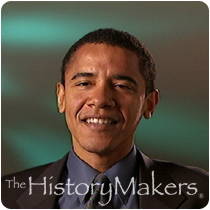 Barack Obama was born on August 4, 1961, in Honolulu, Hawaii. He attended Occidental College for two years before transferring to Columbia University in New York, where he became interested in a career as a social activist.

After graduation, Obama found work as a community organizer, which led him to Chicago. Obama was hired to head the Developing Communities Project and served in this capacity for over three years. However, realizing the limitations of working at such a localized level, Obama enrolled at Harvard Law School. At Harvard, Obama excelled, eventually becoming the President of the Harvard Law Review, the first African American ever to hold this position. After he graduated from Harvard, Obama wrote a book, Dreams from My Father, based on his family’s experiences. He went to work at the Chicago law firm of Miner, Barnhill & Galland.

Obama and his wife, Michelle, are the parents of two daughters, Sasha and Malia.

See how The Honorable Barack Obama is related to other HistoryMakers
Donate Now
Click Here To Explore The Archive Today!