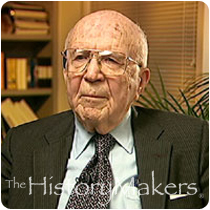 See how The Honorable Augustus F. "Gus" Hawkins is related to other HistoryMakers
Donate Now

Augustus “Gus” Hawkins was born in Shreveport, Louisiana, on August 31, 1907. Moving to Los Angeles with his family in 1918 to escape prejudice, Hawkins attended public schools. After graduating high school in 1926, Hawkins attended the University of California, Los Angeles, earning his A.B. degree in economics in 1931. He went on to take graduate level courses from the University of Southern California’s Institute of Government.

In his first attempt at political office, Hawkins won election to the California State Assembly in 1934, upsetting an incumbent of sixteen years. During the twenty-eight years he served, he authored more than 100 laws and rose to the position of chairman of the Rules Committee. His legislation resulted in African Americans being appointed as judges and state commissioners, and he also championed for the rights of the poor, such as his Fair Housing Act and old age pensions. In 1962, Hawkins was elected to the U.S. House of Representatives, where he would serve until 1990. During his tenure, he continued to champion equal rights and also pressed for legislation to protect youth with the Drug-Free Schools and Communities Act. Hawkins also helped push through the Minority Institutional Aid Act, which gave financial aid to traditional minority colleges, and was the author of the Full Employment Act.

Over the course of his career, Hawkins authored more than 300 laws and succeeded in restoring an honorable discharge to the 170 black soldiers of the 25th Infantry Regiment who were falsely accused of a public disturbance in Brownsville, Texas, in 1906, and removed from the U.S. Army.

Hawkins and his wife, Elsie, lived in Los Angeles until his death on November 10, 2007. Hawkins was 100 years old.

See how The Honorable Augustus F. "Gus" Hawkins is related to other HistoryMakers
Donate Now
Click Here To Explore The Archive Today!