Information about The Honorable Audrey Collins 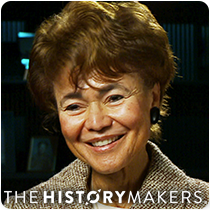 See how The Honorable Audrey Collins is related to other HistoryMakers

Federal District Court Judge Audrey B. Collins was born on June 12, 1945 in Chester, Pennsylvania to Dr. Furman L. Brodie Jr. and Audrey Moseley Brodie. She attended Yeadon High School in Yeadon, Pennsylvania, where she graduated as valedictorian of her class. Collins attended Howard University in Washington, D.C. and graduated Phi Beta Kappa, earning her B.A. degree in political science in 1967. That year, she received Howard University’s Woman of the Year Award and married her husband, Dr. Tim Collins. In 1969, she earned her M.A. degree in public administration from American University’s School of Government and Public Administration. In 1974, Collins returned to school to earn her law degree from the University of California at Los Angeles. She was a member of the UCLA Law Review, and earned her J.D. degree in 1977, graduating with the Order of the Coif.

In 1977, Collins served as an assistant attorney of the Legal Aid Foundation of Los Angeles, and in 1978, she was hired as a deputy district attorney of the Los Angeles County District Attorney’s office. In 1987, Collins was promoted to head deputy at the Torrance Branch office. She was then appointed as the assistant director of the Bureaus of Central and Special Operations the following year. In 1992, she was named the assistant district attorney and a deputy general counsel in the Office of the Special Advisor, where she served as counsel to the Los Angeles Police Department Board of Commissioners. Two years later, President Bill Clinton nominated Collins for a seat on the District Court for the Central District of California. She served as chief judge for the court from 2009 through September, 2012.

Collins and her husband have two adult children, one whom is an actor and the other an attorney.

Judge Audrey B. Collins was interviewed by The HistoryMakers on December 18, 2013.

See how The Honorable Audrey Collins is related to other HistoryMakers
Click Here To Explore The Archive Today!