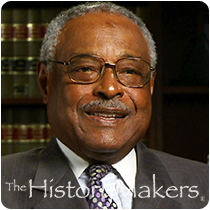 See how The Honorable Anthony W. Hall, Jr. is related to other HistoryMakers
Donate Now

Attorney Anthony William Hall, Jr. was born on September 16, 1944 in Houston, Texas to Quintanna Wilson Hall Alliniece and Anthony William Hall, Sr. Hall received his B.A. degree from Howard University in 1967, and served in the military from 1967 to 1971. While in the military, Hall attained the rank of captain and received the Purple Heart as well as three Bronze Stars. After his military service, Hall worked for the Harris County Commissions Office in 1971 and served as a State Representative from 1972 until 1979, when he was first elected to the Houston City Council. Upon his appointment, Hall was the third African American, after Judson W. Robinson, Jr. and Ernest McGowen, to be elected to the city council in Houston.

Hall obtained his J.D. degree from the Thurgood Marshall School of Law at Texas Southern University in 1982.
In 1990, he became the first African American chairman of the Houston Metropolitan Transit Authority, an agency which was created as a response to the public’s desire to have an efficient and reliable transportation system that would replace the existing malfunctioning busing system. During this time, Hall also became one of only three African Americans among the 50 partners in the Houston law firm, Jackson Walker, LLP. The firm, which has offices in Austin, Dallas, Fort Worth, Houston, San Angelo and San Antonio, represents clients in litigation for intellectual property, health care, labor and employment, technology, bankruptcy and numerous other fields. Hall served as the City Attorney for the City of Houston from 1998 until 2004, when he became the Chief Administrative Officer for the city. Hall’s key responsibilities included implementing some of the Administration’s significant priorities, participating in the budget process, and overseeing the Houston community’s safety issues.

Hall is also the Chairman of the Boulé Foundation and is involved with Sigma Pi Phi Fraternity, serving as the past national president of the organization, and is currently on the board of trustees. He has devoted many years of his life to public service and has been given several awards for outstanding civic work. These awards include the Fifth Ward Enrichment Program’s Heart of Houston, the Black Achiever Award from the YMCA, the George “Mickey” Leland Community Service Award from the Barbara Jordan—Mickey Leland School of Public Affairs at Texas Southern University in 2006, and the National Forum for Black Public Administrators Marks of Excellence Award for Public Service Leadership in 2009. After years of public service, Hall returned to private practice law in the city of Houston in 2010.

Anthony Hall was interviewed by The HistoryMakers on August 9, 2007.

See how The Honorable Anthony W. Hall, Jr. is related to other HistoryMakers
Donate Now
Click Here To Explore The Archive Today!