Information about The Honorable Anne-Marie Clarke 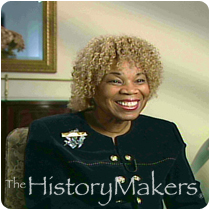 Clarke attended Northwest Missouri State University, graduating in 1970 with her B.A. degree in political science after only three years of study. Clarke entered Saint Louis University’s School of Law and earned her J.D. degree in 1973. In 1979, Clarke married Richard K. Gaines, who would join Clarke in becoming a long standing civic servant in the St. Louis area.

In 1981, Clarke became president of the Mound City Bar Association, a position she remained in for two years. One year after leaving the presidency, Clarke wrote a significant piece for the St. Louis Bar Journal entitled “The History of the Black Bar,” which has been cited in a number of prominent publications, including J. Clay Smith’s 1999 book Emancipation: The Making of the Black Lawyer 1844-1944.

Clarke became Juvenile Division Hearing Officer for the 22nd Judicial Circuit Court of Missouri (City of St. Louis) in 1986, where she would remain for twelve years. During her time in this position, Clarke was known for developing innovative sentences for juveniles who had committed crimes. The same year that Clarke became the Juvenile Division Hearing Officer, she joined the Board of Governors for The Missouri Bar, becoming the first black member of the organization.

In 1993, Missouri governor, Mel Carnahan, appointed Clarke as a member of the City of St. Louis’ Board of Police Commissioners, making her the first African American woman to serve on the Board. She was also elected treasurer by the Board’s members. The following year, Clarke became the first female president of the Board after a unanimous election. After four years as president, Clarke resigned from the Board and became the Family Court Commissioner for the 22nd Judicial Court (City of St. Louis). She has been a member of the National Bar Association Judicial Council for many years. In 2004, Clarke was elected a member of the Judicial Council’s Executive Board, and in June 2005, Clarke was assigned to the Domestic Relations Division.

Clarke was interviewed by The HistoryMakers on October 19, 2007.

See how The Honorable Anne-Marie Clarke is related to other HistoryMakers
Click Here To Explore The Archive Today! 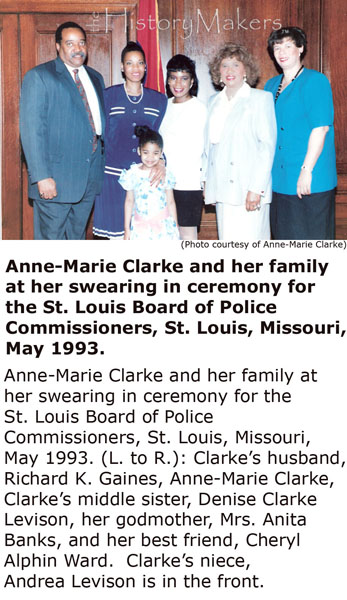