Information about The Honorable Anna Langford 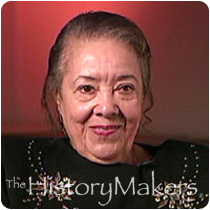 See how The Honorable Anna Langford is related to other HistoryMakers

Chicago alderman and lawyer Anna Langford was born on October 27, 1917 in Springfield, Ohio. Her father, Arthur J. Riggs, died when she was only nine months old and her mother, Alice, died when Langford was eight years old. She lived with her grandmother until 1933, when she moved to Chicago to live with her aunt and uncle. There, she graduated from Hyde Park High School in 1935. Langford attended a trade school to learn office skills and from 1938 to 1956 worked as a typist in the Social Security office, the Election Commissioners Office and in the Office of the Secretary of State.

In February of 1956, after studying for eleven years, she received her J.D. degree from John Marshall Law School at Roosevelt University in Chicago and began an extensive career as a civil rights and criminal lawyer. Langford practiced law throughout the State of Illinois, defended civil rights workers in the 1960s and joined Dr. Martin Luther King, Jr.’s Chicago civil rights marches. In 1963 and 1964, she provided free legal services in many areas, including the State of Mississippi.

In 1971, Langford became the first woman elected to the Chicago City Council. Although she was defeated for reelection in 1975, she returned later to serve two additional terms from 1983, the year she retired from practicing law, until 1991, when she retired from the City Council. She has received numerous humanitarian and civic awards and honors, including being inducted into the Book of Legends by the Black Women Lawyers Association for her immeasurable contributions to the City of Chicago as a lawyer and a public servant.

Anna Langford was interviewed by The HistoryMakers on November 4, 2002.

See how The Honorable Anna Langford is related to other HistoryMakers
Click Here To Explore The Archive Today!