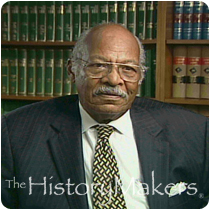 See how The Honorable Andrew L. Jefferson, Jr. is related to other HistoryMakers
Donate Now

Andrew Leon Thomas Jefferson, Jr. was born on August 19, 1934, in Dallas, Texas, to Bertha Jefferson and Andrew Jefferson, Sr. After Jefferson and his family moved to Houston, Texas, in 1936, he attended Jack Yates High School which he graduated from in 1952. Jefferson received his B.A. degree from Texas Southern University in 1956, and his J.D. degree from the University of Texas School of Law in 1959.

In 1975, Jefferson worked in private practice with Jefferson, Sherman & Mims. During this time, Jefferson became the president of the Nu Boule’ chapter of the Sigma Pi Phi Fraternity, an association considered to be the first African American Greek letter organization. Between 1986 and 1987, Jefferson served on the Presidential Search Committee of Texas Southern University and the Merit Selection of Judges Committee. In 1996, Jefferson became a member of the International Society of Barristers, a society of outstanding trial lawyers chosen by their peers on the basis of excellence and integrity in advocacy.

In 2001, the Andrew L. Jefferson Endowment for Trial Advocacy was established at Texas Southern University’s Thurgood Marshall School of Law in Houston, Texas. The endowment seeks to preserve the jury trial in order to consider issues of ethics and excellence in advocacy and the role of litigation in society. Jefferson was a member of numerous professional and civic organizations including the American Bar Association, the Houston Lawyers Association, the Houston Area Urban League and the NAACP.

See how The Honorable Andrew L. Jefferson, Jr. is related to other HistoryMakers
Donate Now
Click Here To Explore The Archive Today!