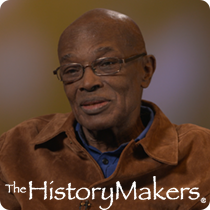 Favorite Color:
Brown
Favorite Food:
Fish/carribean vegetables
Favorite Time of Year:
Spring and fall
Favorite Vacation Spot:
Tobago
Favorite Quote:
How sweet it is to sit and do nothing, then rest afterwards.

Favorite Color:
Brown
Favorite Food:
Fish/carribean vegetables
Favorite Time of Year:
Spring and fall
Favorite Vacation Spot:
Tobago
Favorite Quote:
How sweet it is to sit and do nothing, then rest afterwards.

See how Hollis Lynch is related to other HistoryMakers

Historian Hollis Lynch was born on April 21, 1935, in John Dial, Trinidad and Tobago to Rupert Herman Lynch and Violet Evangeline Gardiner. There, he attended the Hope EC School and Bishop’s High School. Lynch then received his B.A. degree in history from the University of British Columbia in Vancouver, Canada in 1960, and his Ph.D. degree in history from the School of Oriental and African Studies at the University of London in London, England in 1964.

After receiving his Ph.D. degree, Lynch lectured at the University of Ibadan in Nigeria for two years before moving to the United States. He moved to Chicago, Illinois and accepted a position as an associate professor at Roosevelt University in 1966. In 1968, Lynch began teaching at the State University of New York at Buffalo, where he founded the first black studies program in 1969. In the fall of 1969, Lynch began his position as professor of African and Pan African History at Columbia University in New York, where he was the first black historian to hold a tenured position. In 1971, Lynch became the director of the Institute of African Studies at Columbia University, a position he held until 1974. Lynch then served as visiting professor of history at Vassar College in Poughkeepsie, New York in 1977. In 1986, he was reappointed at the director of the African Institute at Columbia. Later, Lynch served as professor emeritus of history at Columbia University in 2005.

Lynch published his first book, Edward Wilmont Blyden, Pan-Negro Patriot, while teaching at Roosevelt University. Lynch published a number of books on the pan-negro movement in the United States. As an undergraduate, Lynch won the Annie Southcott Memorial Prize for best undergraduate honors essay in history. In 2012, he was inducted into the Tobago Literary Hall of Fame for his work as a professor and his literary achievements. Lynch was also a member of the American Council of Learned Studies and the Association of African Studies.

Hollis Lynch was interviewed by The HistoryMakers on February 1, 2017.

See how Hollis Lynch is related to other HistoryMakers