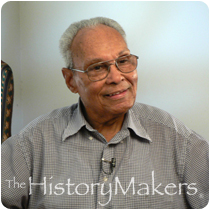 Post office manager and Tuskegee Airman Hiram Emory Little, Sr. was born on March 31, 1919 in Eatonton, Georgia. When Little was young, his family moved from the rural town of Eatonton to Atlanta, Georgia where he attended David T. Howard Elementary and Junior High Schools. While in junior high school, Little was a charter member of Troop 94, the very first Boy Scout Troop in an African American school in Atlanta.

In 1941, Little enlisted in the U.S. Army Air Corps. He was trained at the Chanute Air Force Base located in Rantoul, Illinois, as an aircraft armorer in the Tuskegee Aviation Program. Little also served as a part-time instructor at the Cadet Ground School of the Tuskegee Army Air Base in Tuskegee, Alabama. Little served at the Tuskegee Army Air Base until December of 1943, when he applied for flight training. In 1944, Little graduated from bombardier school and in January of the following year, he was assigned to the 477th Bombardment Group as a crew member on a B-25 bomber. By late 1944, the 477th Bombardment Group was assigned to conduct combat training missions, but winter conditions reduced their flying time. They faced constant instances of racism from white officers.

In March of 1945, the 477th Bombardment Group was moved to Freeman Field, Indiana. Although the 477th trained with both the B-25 and the P-47 aircraft, the war ended before the 477th could be deployed overseas into combat. At Freeman Field, tension between white and black personnel increased due to strict segregationist policies. When Little, along with other black aviators, entered the whites’ only officers’ club, they were arrested. They had defied an illegal order issued by the commander of the 447th Bombardment Group. The commander had classified all black officers as trainees and decreed they were not allowed to use the staff officers’ club. Instead, the trainees, who had already graduated from flight school, were required to use a second former NCO club, housed in a run-down building. This event became known as the Freeman Field Mutiny.

On December 1, 1945, Little was honorably discharged from the U.S. Army Air Corps and enrolled at Morehouse College in Atlanta, Georgia to complete his academic studies. While attending Morehouse College, Little was hired to work for the Atlanta U. S. Postal Service. In 1955, he became one of the first African American supervisors in the Atlanta area. Little worked for the U.S. post office until he retired in 1978 as a mid-level manager. In 2005, at the age of eighty, he received a certificate in carpentry from the Atlanta Technical College. Little, along with the remaining Tuskegee Airmen, was awarded the Congressional Medal of Honor by President George W. Bush in 2007.

Hiram Little was interviewed by The HistoryMakers on September 10, 2007.