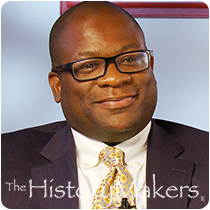 See how Hiram Jackson is related to other HistoryMakers

Publisher Hiram Jackson was born in 1965 in Highland Park, Michigan to Hiram Jackson, Sr. and Naomi Jackson. He attended the Detroit Country Day School and received his B.S. degree in industrial and labor relations from Cornell University in 1987.

Upon graduation, Jackson joined a management training program at Ford Motor Company and worked in the corporation’s labor relations department. He resigned from Ford in the early 1990s and co-founded New Center Collision, which marketed auto body repairs to corporate fleets. In 1994, Jackson sold his share of New Center Collision and used the funds to buy DMC Technologies, Inc., a low-voltage cabling and wiring firm, where he served as chairman and chief executive officer. He then established GlobalView Technologies, LLC and Genesis Energy Solutions in 1998, and purchased the Wixom, Michigan-based Clover Technologies, Inc. in 2001.

In 2003, Jackson became part of an ownership group that purchased the Michigan Chronicle and several other newspapers from Chicago-based Sengstacke Enterprises Inc., which resulted in the formation of the multi-media company, Real Times Media, LLC. He was named chief executive officer of Real Times Media in 2006 and appointed as publisher of the Michigan Chronicle in 2012.

Jackson has served on several Detroit area boards including the Detroit Zoological Society, the Charles H. Wright Museum of African American History, First Independence Bank CDC, the Detroit Branch of the NAACP, and the Boys and Girls Club of Southeastern Michigan. He is a member of Governor Rick Snyder’s Office of Urban and Metropolitan Initiatives Advisory Group, and was elected to the board of directors of the National Newspaper Publishers Association (NNPA) in 2013.

Jackson has received numerous acknowledgements and accolades throughout his career. He has been profiled in several publications including Savoy magazine, Diversity MBA Magazine and Black Enterprise. He was also recognized as a top 40 executive under the age of 40 by Crain’s Detroit Business, and was named one of Michigan’s most powerful African American leaders by Corp! Magazine. In 2011, Jackson received the General Motors African Ancestry Network (GMAAN) GMAAN Trailblazer Award and the National Association of Security Professionals annual Maverick Award.

Hiram Jackson was interviewed by The HistoryMakers on June 23, 2014.

See how Hiram Jackson is related to other HistoryMakers
Click Here To Explore The Archive Today!