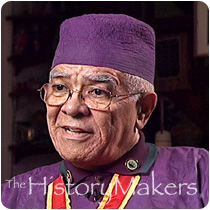 See how Hilbert D. Stanley is related to other HistoryMakers

Hilbert Dennis Stanley, an educator, was born on February 24, 1931, in Cambridge, Maryland. He attended the all black Robert Moton School. Although he was not sure if he could afford college, with a gift from his mother and grandfather, he was able to go on to Morgan State University. He excelled in school, earning a B.S. degree in biology in 1952 and an M.S. degree in science in 1972. Stanley went on to Wayne State University in Detroit, and in 1978 earned an Ed.D. in administration and supervision.

Stanley taught science, but soon became a high school principal at Edmondson High School. He also served as principal at Lake Clifton Senior High School and Southwestern High School. As an urban area administrator, Stanley's assignments included system reorganization and decentralization, desegregation, drug abuse leadership training, and career development programs. He also served from 1981 to 1984 as the director of human services and education liaison officer to the Mayor of Baltimore, William Donald Schaefer. In 1993, Stanley retired from the Baltimore City Public Schools and became an instructor part time at Morgan State University. He has remained loyal to his alma mater, serving as the president of the National Alumni Association and also as its treasurer. He has guided the improvements in procedures and practices in the Alumni Office management, created new positions, and has been helpful in renovating and making available a building to house alumni operations. Under his leadership, he expanded the newspaper, developed an investment portfolio, and took fiscal responsibility of the budgetary issues. Stanley now serves as chair of the Board of Trustees of the MSU Foundation.

Stanley has served as director of development for the NAACP Baltimore Branch ACT-SO Program. He serves as a member of the Board of Trustees of the Baltimore City Historical Society. As an extension of his interest in educational activity and civil rights, Stanley became involved in the concerns of African American Catholics. From 1991 to 2002, Stanley was executive director of the National Black Catholic Congress (NBCC). With some three million Catholics of African descent in the U.S., the NBCC provides leadership and programs aimed at raising the consciousness of the Church to the history and cultural values of African Americans. Pope John Paul II appointed Stanley as a Knight of St. Gregory the Great. Stanley played a key role in the construction of "Our Mother of Africa Chapel" at the Basilica of the National Shrine of the Immaculate Conception in Washington, D.C. The canonization by Pope John Paul II of St. Josephine BAKHITA, the first African woman, took place at the Vatican in 2000, and was attended by a pilgrimage organized by Stanley. A relic of St. BAKHITA was placed in the altar at the "Our Mother of Africa Chapel."

Stanley was an R.O.T.C. graduate and served as an officer in the U.S. Army. He now resides in Baltimore.

He is a widower and has a son, a daughter, and several grandchildren.

Hilbert D. Stanley was interviewed by The Historymakers on March 6, 2004.

See how Hilbert D. Stanley is related to other HistoryMakers
Click Here To Explore The Archive Today!