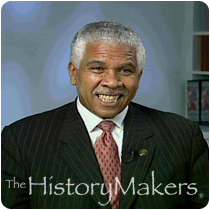 Favorite Color:
Purple
Favorite Food:
Crepes (Fruit)
Favorite Time of Year:
Spring
Favorite Vacation Spot:
Caribbean
Favorite Quote:
There's Nothing You Can't Get Done If You're Willing To Let Someone Else Get Credit For It.

Favorite Color:
Purple
Favorite Food:
Crepes (Fruit)
Favorite Time of Year:
Spring
Favorite Vacation Spot:
Caribbean
Favorite Quote:
There's Nothing You Can't Get Done If You're Willing To Let Someone Else Get Credit For It.

See how Hilary Shelton is related to other HistoryMakers
Donate Now

NAACP lobbyist and policymaker Hilary Otis Shelton was born on August 12, 1958, in St. Louis, Missouri. Shelton received his B.A. degree in political science from Howard University in Washington, D.C., and went on to attain his M.A. degree in communications from the University of Missouri in St. Louis.

Shelton first worked as the federal program policy director for the United Methodist Church’s social justice agency, The General Board of Church and Society. There, he worked on the church’s public policy agenda, particularly on issues pertaining to black colleges and universities. He was highly involved in the passage of the Civil Rights Act of 1991, and also advocated for several other important acts including the Violence Against Women Act. A champion of causes affecting the African American community, Shelton then went on to serve in the position of federal liaison/assistant director to the government affairs department of The College Fund/UNCF, also known as The United Negro College Fund, in Washington, D.C. There, Shelton worked with federal government agencies and departments, as well as colleges and universities to secure the survival, growth, and educational programming excellence of the forty private historically black colleges and universities throughout the United States.

From there, Shelton moved on to the NAACP’s Washington bureau, where he handles federal and legislative affairs as well as public policy concerns for the organization’s Washington, D.C., office. Shelton serves on a number of national boards of directors including The Leadership Conference on Civil Rights, The Center for Democratic Renewal, the Coalition to Stop Gun Violence and the Congressional Black Caucus Institute among many others. Shelton has been honored numerous times for his work. He was the recipient of the National NAACP Medgar W. Evers Award for Excellence, the highest honor bestowed upon a national professional staff member of the NAACP; the American Arab Anti-Discrimination Committee’s Excellence in Advocacy Award; and the Religious Action Center’s Civil Rights Leadership Award in honor of Dr. Martin Luther King, Jr.

See how Hilary Shelton is related to other HistoryMakers
Donate Now
Click Here To Explore The Archive Today!