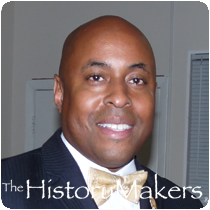 Reverend and historian Herman ‘Skip’ Mason was born on July 14, 1962 in Atlanta, Georgia to Herman ‘Pop’ Mason and Deloris Hughes. At the age of fourteen, Mason read Alex Haley’s Roots and was inspired to research and document the history of African American people. In 1980, Mason graduated from Therrell High School in Atlanta, Georgia and enrolled at Morris Brown College in Atlanta. In 1982, Mason realized his life-long goal by being initiated into the Iota Chapter of Alpha Phi Alpha Fraternity, Incorporated on the anniversary of the death of Dr. Martin Luther King. That same year, he became president of the chapter and during his tenure the fraternity was named Georgia College Chapter of the Year. After graduating college in 1984 with his B.A. degree in communications and history, Mason joined the Eta Lambda chapter and became the chapter’s historian in 1985. In 1989, Mason received his M.S. degree in library and information science with a concentration in African American history from Clark Atlanta University in Atlanta and was awarded his certification in archival studies from the Archives Institute of the Jimmy Carter Presidential Library. Mason later studied at the Phillips School of Theology in Atlanta.

Mason began his career by working at the Herndon Home Museum in Atlanta during his junior year of college as a historian where he interpreted the history of the Herndon Family and the Atlanta Life Insurance Company. In 1986, he worked for the U.S. Department of Interior interpreting the historical significance of the Martin Luther King family with the King Center Library and Archives. From 1987 to 1992, Mason worked for the Atlanta Fulton Public Library as the black studies librarian and archivist for the Special Collections Department. His work with the library involved developing strategies for identification and procurement of archival collections on African Americans in Atlanta, the state of Georgia and the Southeast region. During this period, Mason became the first national archivist for Alpha Phi Alpha Fraternity, Incorporated and helped to facilitate the transfer of its archives to the Moorland Spingarn Research Center at Howard University. In 1992, Mason founded Digging It Up, a full scale African American research and consulting firm which he later renamed Skip Mason’s Archives in 1998. Mason also became the pastor of Greater Hopewell Christian Methodist Episcopal Church in Atlanta and later, pastor of St. James C.M.E. Church in Washington, Georgia. In 2006, Mason curated House of Alpha, an exhibition which displayed the records of Alpha Phi Alpha, Incorporated, local chapters and the personal collection of fraternity members for the fraternity’s centenary in Washington, D.C. In 2008, Mason was named Alpha Phi Alpha, Incorporated’s thirty-third general president. Mason served as Morehouse College’s archivist and interim director of Student Affairs.

See how Herman "Skip" Mason is related to other HistoryMakers
Donate Now
Click Here To Explore The Archive Today!