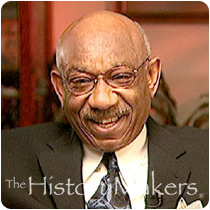 See how Herman Russell is related to other HistoryMakers
Donate Now

Atlanta construction executive Herman Russell is a civic leader and philanthropist whose construction company ranks as the fourth largest in the U.S. The company has annual sales of more than $150 million and employs 700.

Russell, chairman/CEO of H. J. Russell & Co., was born on December 23, 1930, in Atlanta, one of seven children of Maggie and Rogers Russell. His father was a plasterer from whom he learned the trade starting at the age of twelve. He bought his first parcel of land for $125 at age sixteen, later building a duplex on the property. He used his savings to help pay his tuition at Tuskegee University. Returning to Atlanta, he worked alongside his father. After his father's death in 1957, Russell took over the company and expanded it into a conglomerate that includes general contracting, construction/program management, real estate development and property and asset management. Russell's other interests are in airport concessions.

An avid supporter of Atlanta and its youth, Russell is the founder of the Herman J. Russell Entrepreneurial Scholarship Foundation for an Atlanta elementary school. Among his recognition awards are induction into the Junior Achievement Atlanta Business Hall of Fame in 1992, and recipient of the Horatio Alger Award in 1991. He and his wife, Otelia, lived in midtown Atlanta. They are the parents of two sons and a daughter, who are executives with H. J. Russell Co.

Herman J. Russell was interviewed by The HistoryMakers on March 15, 2002.

See how Herman Russell is related to other HistoryMakers
Donate Now
Click Here To Explore The Archive Today!