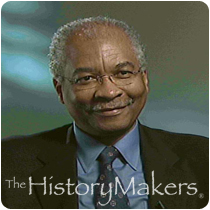 See how Herman Brenner White, Jr. is related to other HistoryMakers
Donate Now

Physicist Herman Brenner White was born in Tuskegee, Alabama on September 28, 1948. He attended Macon County public schools and developed a great interest in science at an early age. Growing up so close to the Tuskegee Institute, White was able to talk to the professors there about science. In 1966, he graduated from the Tuskegee Institute High School. He decided to attend Earlham College in Richmond, Indiana for his undergraduate studies where he obtained his B.A. degree in physics in 1970. During graduate school at Michigan State University, White split his time at Michigan State's Cyclotron Laboratory in East Lansing, Michigan and the Argonne National Laboratory in Argonne, Illinois. As an award for excellent graduate research, White became an Alfred P. Sloan Foundation Fellow and was sent to study in Geneva, Switzerland at the CERN European Laboratory for Particle Physics in 1972. He found a new passion there and shifted his research areas from nuclear and acceleration physics to particle physics. In 1974, he received his M.S. degree in physics from Michigan State University.

White was initially a neutrino physicist at the Fermi National Accelerator Laboratory (Fermilab) and has held various positions there since 1974. Fermilab is the highest energy particle accelerator in the world where White has been a senior scientist. He was a university fellow in physics from 1976 to 1978 at Yale University. He taught physics again starting in 1987 during his doctoral studies at Florida State University and received his Ph.D. degree in 1991. At Fermilab he has collaborated on numerous high-energy particle physics experiments in addition to the design of high-energy particle beam and detector systems. One notable collaboration was when White worked as a kaon researcher and diplomat with Universidad Autonoma de San Luis Potosi in Central Mexico.

White has been an adjunct physics professor at North Central College in Naperville, Illinois. In addition to his earlier fellowships, White was selected as an Illinois Industrial Research Corridor Fellow for North Central College in 1994. He has served on various physics communication and advisory panels for governmental agencies and the American Physical Society and has been a member of the American Physical Society’s Public Face of Physics Team.

Herman White was interviewed by The HistoryMakers on November 13, 2006.

See how Herman Brenner White, Jr. is related to other HistoryMakers
Donate Now
Click Here To Explore The Archive Today!