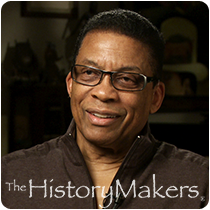 See how Herbie Hancock is related to other HistoryMakers
Donate Now

Pianist and composer Herbert Jeffrey "Herbie" Hancock was born on April 12, 1940 in Chicago, Illinois to Winnie Belle and Wayman Edward Hancock. Hancock began to study music at age seven, and performed a Mozart piano concerto with the Chicago Symphony Orchestra by age eleven. He played jazz in high school and double-majored in music and electrical engineering at Grinnell College.

In 1960, Hancock was discovered by trumpeter Donald Byrd. After two years of session work with Byrd, as well as Phil Woods and Oliver Nelson, he signed with Blue Note Records as a solo artist. Hancock’s 1963 debut album, Takin’ Off, was an immediate success, and produced the hit “Watermelon Man.” Subsequent albums on Blue Note included Maiden Voyage, Empyrean Isles, and Speak Like a Child, among others. In 1963, trumpeter Miles Davis invited Hancock to join the Miles Davis Quintet alongside Wayne Shorter, Ron Carter, and Tony Williams, where he stayed for five years. Hancock also composed the score to Michelangelo Antonioni's 1966 film Blow Up, which led to a successful career in feature film and television music.

After leaving the Davis Quintet, Hancock established his own sextet and recorded several albums, including 1971’s Mwandishi. He then formed a new band called The Headhunters and, in 1973, recorded Head Hunters for Columbia Records, which became the first jazz album to go platinum. Hancock produced eleven albums that were included in the pop charts during the 1970s. He also recorded and performed with the group V.S.O.P. in the late 1970s, toured with trumpeter Wynton Marsalis in 1980, and then collaborated with producer Bill Laswell in the mid-1980s. Hancock later moved to the Verve record label and formed a band to record 1996's The New Standard. He then released 1 1 with Wayne Shorter in 1997. Hancock reunited with The Headhunters in 1998 and, that same year, collaborated with a number of artists on his multiple Grammy Award-winning album Gershwin's World. His albums in the 2000s included Future2Future, Directions In Music: Live at Massey Hall, Possibilities, The Imagine Project, and River: The Joni Letters, which won him the Grammy Award for Album of the Year in 2008.

Hancock has been named by the Los Angeles Philharmonic as Creative Chair For Jazz. He also serves as Institute Chairman of the Thelonious Monk Institute of Jazz, and as the 2014 Charles Eliot Norton Professor of Poetry at Harvard University. In addition, he is a founder of The International Committee of Artists for Peace, and was designated an honorary UNESCO Goodwill Ambassador in 2011.

In all, Hancock has released over forty albums and received fourteen Grammy Awards. He also received an Oscar Award for composing the score to 1986’s Round Midnight. His other honors include a Soul Train Music Award, a U.S. Radio Award, and multiple BMI Film Music Awards and MTV Video Awards. He was also awarded the “Commandeur des Arts et des Lettres” by French Prime Minister Francois Fillon.

Herbie Hancock was interviewed by The HistoryMakers on November 13, 2014.

See how Herbie Hancock is related to other HistoryMakers
Donate Now
Click Here To Explore The Archive Today!